The statue was toppled and plunged into Bristol Harbour in June

Four people have been charged with criminal damage after slave trader Edward Colston's statue was torn down in Bristol back on June 7th. 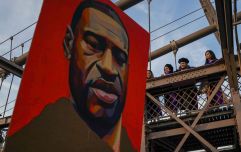 END_OF_DOCUMENT_TOKEN_TO_BE_REPLACED

The death of George Floyd at the hands of police in Minnesota, USA led to a series of global anti-racism Black Lives Matter protests.

In the UK, these protests sparked debate regarding the influence of slave traders upon British society. In Bristol, protestors reacted by toppling a statue of 17th century slave trader Edward Colston.

Edward Colston was an influential member of the Royal African Company, trading in slaves, gold, silver and ivory along the coast of West Africa.

People objected to the deifying of a slave trader with statue status in the city, in addition to Colston having schools and notable public buildings named after him.

Now, four of those involved in toppling Colston's statue - and hurling it into Bristol Harbour - have been charged with causing criminal damage.

END_OF_DOCUMENT_TOKEN_TO_BE_REPLACED

A statement from the Crown Prosecution Service (CPS) read:

"The Crown Prosecution Service reminds all concerned that criminal proceedings against all four are now active and that they have the right to a fair trial.

"It is extremely important there should be no reporting, commentary or sharing of information online which could in any way prejudice these proceedings."

After the statue was toppled and dumped in Bristol Harbour, it was found to have suffered just over three thousand pounds worth of damage.

When slavery was abolished in the UK in 1833, it wasn't long before the Slave Compensation Act was passed in 1837.

This aimed to repay slave traders (and their beneficiaries) due to loss of income brought about by the closure of the slave trade.

University College London (UCL) estimate that between 10-20% of Britain’s richest people have historical links to the slave trade - from which they continue to benefit.

Over the years, numerous attempts have been made to ascertain exactly who continues to financially benefit from the compensation of slave owners.

Attempts have been made via Freedom of Information (FOI) requests issued to the British Government and Bank of England.

Every single request has so far been denied.