Watch Parisians sing at the feet of their burning Lady

A fire is devastating the Notre Dame cathedral in Paris, felling its world-famous spire and destroying religious artefacts.

Emmanuel Macron declared a national emergency and visited the site and the government's interior minister warned firefighters may be unable to save the 850-year-old building.

People in Paris are gathering in sight of the "terrible fire" and singing.

Parisians sing as their beautiful cathedral tragically burns. What an awful day for the City of Lights #NotreDame pic.twitter.com/6qYtR2z1w0 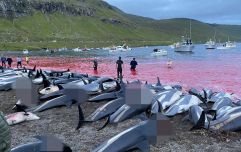 END_OF_DOCUMENT_TOKEN_TO_BE_REPLACED

A spokesperson at Paris' fire department said the next 90 minutes were "crucial" to containing the fire.

Notre Dame spokesman Andre Finot told French media: "Everything is burning, nothing will remain from the frame."

France's interior minister cautioned firefighters may not be able to save the building. Efforts are being focused on rescuing priceless artworks from the back of the cathedral, as well as the North tower.