A chef from Newcastle appeared on BBC Breakfast on Wednesday morning and managed to fit in a sly but hilarious dig at prime minister Boris Johnson.

Max Gott was speaking about the local lockdown situation in the north-east via video link and made sure a poster displaying famous 'British Tits' was just in shot.

On that poster of tits was of course, the biggest tit of them all, Boris Johnson.

Owner of Bistro Forty-Six, Gott said: "It's sad for a business to watch something like that fall away in one go.


"Every week just gets harder so we can't take on more staff at the moment. 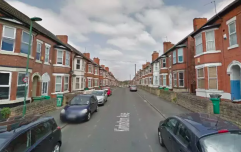 Four students fined £10,000 each for house party during Tier 2 lockdown

END_OF_DOCUMENT_TOKEN_TO_BE_REPLACED

"We're having to diversify - we are opening as a takeaway as well with a slightly different concept of what we currently do and I think that's the only way we can go forward.

"It makes it so hard to operate, we constantly feel that if we do something wrong it's our licence, it's our livelihood that's going to come under fire.

Gott is a long time critic of Johnson, obviously, and has previously spoken against the legislation that allowed restaurants to open at limited capacity, tweeting: "Dear Boris Johnson. We are running at 40% capacity. Even if we are full 7 days a week we will not break even.

"Its physically not possible for us to make money under current guidance. We need help! You absolute weapon. Much love, Every independent restaurant."


popular
QUIZ: Locate the European football clubs and stadiums on the map
QUIZ: Can you name all the heroes on The Boys?
Liverpool step in on free school meals after Tories vote against extension
Everton's James Rodriguez injured by Virgil van Dijk
Arachnado, a film about spider tornadoes, is here to save 2020
Four students fined £10,000 each for house party during Tier 2 lockdown
QUIZ: Name all 50 of these 2000s Champions League players