It's after new advice from the Crown Prosecution Service

Migrants who pilot dinghies and small boats across the English Channel with the intention of claiming asylum will no longer be prosecuted, the Crown Prosecution Service (CPS) has said.

END_OF_DOCUMENT_TOKEN_TO_BE_REPLACED

This is despite the Home Office labelling small boat pilots "people smugglers," and Priti Patel's promises to make the route across the Channel "unviable."

The Home Office has been pushing to criminalise Channel crossings, and since last year the offence of assisting unlawful migration has been used to prosecute boat pilots, despite the fact that organised crime group members are rarely on board the dinghies.

Since June 2020, 19 migrants who steered boats have been jailed, for sentences between 16 months and four-and-a-half years.

The Independent reports that new legal guidance released by the CPS on Tuesday says: "In cases involving the use of a boat where the sole intention is to be intercepted by Border Force at sea and brought into port for asylum claims to be made, no breach of immigration law will take place […] the same applies where the intention is to sail the boat to a designated port of entry in order to claim asylum." 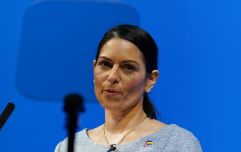 END_OF_DOCUMENT_TOKEN_TO_BE_REPLACED

Therefore in these circumstances, asylum seekers have not entered the country under the terms of the Immigration Act.

In order for a migrant to be prosecuted for steering a boat across the Channel, there will have to be evidence that they were trying to secretly reach shore and escape, rather than claiming asylum.

The guidance says that prosecutors much treat boats in the same way as other forms of entry to the country like lorries and cars.

Frank Ferguson, the CPS lead on immigration crime, said: "We are confident the approach we have agreed today strikes a proportionate balance between deterring criminal gangs from attempting dangerous crossings and acting in the interests of justice and compassion."

This year has seen record numbers of people make the dangerous journey across the Channel in small boats and dinghies. Nearly 6,000 people have reached the UK in the first half of 2021.

popular
Kylian Mbappe asked PSG to sell Neymar and replace him with Ousmane Dembele
Horrifying reason why you should avoid making your bed first thing in the morning
Groom slammed for going to own wedding to bride, 16, in jeans and t-shirt
The JOE Friday Pub Quiz: Week 295
Woman reveals cruel reason date dumped her after they had sex for the first time
Fan 'stamped on by Oli McBurnie' feared he was 'going to die'
Topless mum in her undies rescues pet goose from bald eagle in crazy video
You may also like
News
'No possibility' Ukrainian refugees would be sent to Rwanda for processing, says Downing Street
News
Boris Johnson confirms Home Office's plans to send asylum seekers to Rwanda
News
Priti Patel unlawfully seized asylum seekers’ phones, court rules
News
Russia to blame for hoax calls made to Priti Patel and Ben Wallace, says No 10
Entertainment
Andy Serkis slams Priti Patel over Ukraine refugee crisis in powerful Bafta speech
Next Page