Matt Hancock is reportedly in talks over a £100,000 book deal discussing his role in the pandemic, with suggestions that the tone will paint him in a "heroic light".

As initially reported by the Daily Mail, the former health secretary is in discussions with publishers HarperCollins over a potential project - the working title at present is (wait for it)... 'How I Won the Covid War'.

While this title has not been fully verified and there is still plenty of speculation surrounding the book, Hancock told the Mail: "I have been approached to write a book, but no decisions have been made.' 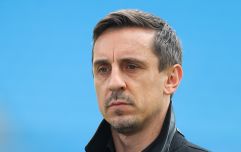 Gary Neville hits out at ‘bullsh*tter’ Rishi Sunak over resignation

END_OF_DOCUMENT_TOKEN_TO_BE_REPLACED

The as-yet unconfirmed book is rumoured to be a "blow-by-blow" account of "heated" lockdown discussion amongst the government and health experts, painting him in a more "heroic light" in the process.

Moreover, the book is expected to be used as a platform for him to dispute claims he was to blame for key blunders throughout multiple lockdowns, as well as attempt to get back into party or even Cabinet politics.

In one of the biggest stories of 2021, Hancock resigned as health minister not after having been heavily criticised in the extraordinary testimony delivered by the PM's former adviser, Dominic Cummings, but after he was caught cheating on his wife with his own close personal aide, Gina Coladangelo.

Amidst all the outrage, Cummins labelled the 43-year-old "a liar" and even revealed a private WhatsApp message where Boris Johnson appeared to call him "f***ing hopeless".

Angela Rayner has labelled the book as "disgusting" and "insult to each and every bereaved family" who suffered as a result of the UK's poorly handling of the pandemic.

This is disgusting and an insult to each and every bereaved family.

Boris Johnson needs to step in and block Matt Hancock from getting a bumper pay day to put his spin on the government’s failures before we get the truth in a public inquiry. https://t.co/wbyy6TmugA

The deputy Labour leader went on to say ACOBA (the Advisory Committee on Business Appointments) should stop the deal in its tracks, while simultaneously labelling it "toothless and ineffective" - the suggestion "Boris Johnson needs to step in and stop Matt Hancock cashing in on tragedy and failure".

A dead cert to be the bestseller on everyone's Christmas list this year...

popular
Metallica finally reacts to Stranger Things 'Master of Puppets' scene
Gary Neville hits out at ‘bullsh*tter’ Rishi Sunak over resignation
Ed Balls and Susanna Reid dance on GMB as protester sings 'Bye Bye Boris'
Bayern Munich not convinced Barcelona will exist in two years, refuse instalments for Robert Lewandowski
Brit on holiday beaten with a brick by gang before being thrown in the sea unconscious
Dad who ran off with Ukrainian refugee says couple are doing 'brilliantly' - but he can't see his kids
Premier League player arrested on suspicion of rape facing two more allegations
You may also like
Politics
'It's happening' trends on Twitter as Boris gets rocked by ministerial resignations
News
Rishi Sunak has resigned as Chancellor of the Exchequer
News
Sajid Javid: Health secretary resigns amid Chris Pincher scandal
News
Boris Johnson 'forgot' about Chris Pincher sexual misconduct briefing, says government minister
News
Dominic Raab may just have delivered the 'car crash interview of the year' over Chris Pincher scandal
Next Page