Liverpool have asked the club's fans to help support the British Red Cross' We Love Manchester Emergency Fund which aims to help those who have been injured or bereaved by the bombing of the Manchester Arena last month.

A post on the club's website, which has been shared across their social media channels, calls for the club's followers to support the fund and 'stand in solidarity with their North West neighbours'. The post also points fans towards a specially set-up Just Giving page, explaining that those that make donations will be entered into a draw for a 2017-18 jersey, signed by the club's players.

Liverpool's Just Giving page can be reached by clicking here.

#LFC are supporting the 'We Love Manchester Emergency Fund'.

22 people died in the bombing, which took place shortly after an Ariana Grande concert had finished at the Arena. A further 59 were hospitalised, some of which suffering life-changing injuries. 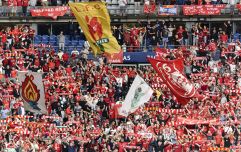 END_OF_DOCUMENT_TOKEN_TO_BE_REPLACED

Ariana Grande returns to Manchester this weekend to perform in the One Love Manchester concert at Old Trafford Cricket Ground. All money raised by the concert, which features a number of high profile artists, will also go towards those affected by the bombing.