He dropped the c-bomb and threatened a knuckle sandwich within seconds - but the road rage driver Ronnie Pickering isn't an "aggressive guy" really.

Hull resident Pickering has defended his apoplectic behaviour towards a motorcyclist, who recorded the rant and uploaded the footage to YouTube, which has now reached more than a million views and counting.

Pickering told Hull Daily Mail: "He really got to me. I am not an aggressive guy. He was baiting me so I thought I would give him a few of my thoughts."

The portly 54-year-old, who was on his way home from Asda, then went on to describe how he saw the incident.

"I heard a tap, which I thought was the driver using his boot to hit my car. I don’t know why he did this. He overtook a load of cars that was queueing. He encroached into my safety gap." 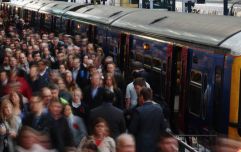 END_OF_DOCUMENT_TOKEN_TO_BE_REPLACED

The footage filmed on GoPro showed the Northerner shaking his fist before repeating 'Do you know who I am', which has since become an internet joke.

Pickering added: "I was wanting to turn right, but he wouldn’t go. I felt as though he was baiting me."

If only Ron could have apologised as quickly as he went postal...

popular
Hedge fund requires bailout after Reddit users cause 800% increase in GameStop shares
Group fronted by Darron Gibson favourites to buy Wigan Athletic
QUIZ: Guess the football stadium from the photo
A definitive ranking of every swear word from worst to best
Zlatan Ibrahimovic tells teammates no racist words were used in Lukaku exchange
Influencer defends her trip to Dubai, claims it was for 'essential work'
Premier League admit offside mistake for Man City goal
You may also like
News
TFL bus drivers fear for their lives
News
Northern Fail: Railways, nationalisation and the United Kingdom
Life
Which is the best way to commute - Underground Tube or fish tube?
Life
Bank holiday traffic was so bad that people started playing Twister
News
BBC reporter confirms that he wasn't run over by a truck during live broadcast
Next Page