Great news for fans of all things grilled and salty

Are you worried about the possible consequences of an 'increasingly likely' no-deal Brexit? Concerned that border checks and tariffs on goods as a result of leaving the customs union will cause delays and possibly even food shortages in our supermarkets? If the answer is yes, you're a rational person. If the answer is no, I admire your carefree attitude.

Either way, I have reassuring news for all of you who are fans of halloumi cheese, Cyrpus' greatest export after Stavros Flatley.

There will be no tariffs placed on halloumi imports from the EU if the UK leaves without a deal.

Us Brits import a whopping three-quarters of the halloumi that Cyprus produces, amounting to a staggering 12,000 tonnes every year.

The British high commissioner pledged to impose no tariffs of any sorts on the cheese amid a series of negotiations with the Cypriot government designed to limit the damage that a no-deal Brexit could cause to trade with the EU member state.


"The tariff on imported halloumi from Cyprus will be zero," the commission posted on Twitter. "We know this will be warmly welcomed by Cypriot exporters and British consumers alike."

In response to lots of enquiries, we are pleased to confirm that, even in a no deal #Brexit, the tariff on imported #halloumi from #Cyprus will be zero. We know this will be warmly welcomed by Cypriot exporters and British consumers alike. @cyMCITpress @CostasKadis @GLakkotrypis pic.twitter.com/MfkSTUZBaj 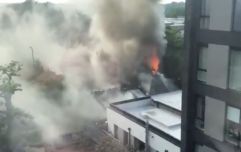 Cadbury Club engulfed in blaze as smoke spreads over Birmingham

END_OF_DOCUMENT_TOKEN_TO_BE_REPLACED

Britain and Cyprus are also hoping to come to an agreement that will allow British immigrants on the island a year-long period to apply for residency status.

Stephen Lillie, the British high commissioner, said: "It is because of the continued uncertainty and risk of a no-deal Brexit on 29 March that my team and I at the British High Commission continue to engage on a frequent basis with Britons in Cyprus."

Cyprus has already said that it would be charging Britons a residency fee despite the UK government’s decision this month to scrap a £65 charge on EU citizens continuing to stay after Brexit, but the amount has not yet been announced.

You may also like
Entertainment
The JOE Friday Pub Quiz: Week 204
News
280,000 A-Level students' grades downgraded by exam boards
News
UK heatwave to continue throughout most of next week
News
BBC defends use of N word in news report
News
Explosion in Beirut, Lebanon leaves many people injured
Next Page