END_OF_DOCUMENT_TOKEN_TO_BE_REPLACED

Get it? Because Donald Trump doesn't like the press? And if he wants to send one of them out of the press room, he can whip out the red card and then they have to leave? Because that is how democracy works? And also that is how football works, like if the referee just doesn't like one of the players - BAM! - RED CARD! - off they go.

Anyways, FIFA President Gianni Infantino presented Trump with a yellow card and a red card, as well as some soccer jerseys with TRUMP on the back, during their meeting in the Oval Office about the 2026 World Cup, which is being held in the USA, Canada and Mexico.

In the Oval Office, FIFA President Infantino gifts Trump a yellow and red card for when he wants to "kick out someone." Trump jokingly holds it up to the press pool. (via @SteveKopack) pic.twitter.com/uTguXTEhZE

END_OF_DOCUMENT_TOKEN_TO_BE_REPLACED

According to The Hill, Trump said that "We’re going to have a great partnership, and it’s going to be very special. I won’t be here. Maybe they’ll extend the term. If they don’t extend, the media is going to be very boring."

Yep, even if Trump wins his second term, he'll only be in office until 2024, but his influence may still be felt even then, despite the fact that he assured Infantino earlier that the U.S. government would welcome fans, athletes and officials "without discrimination". 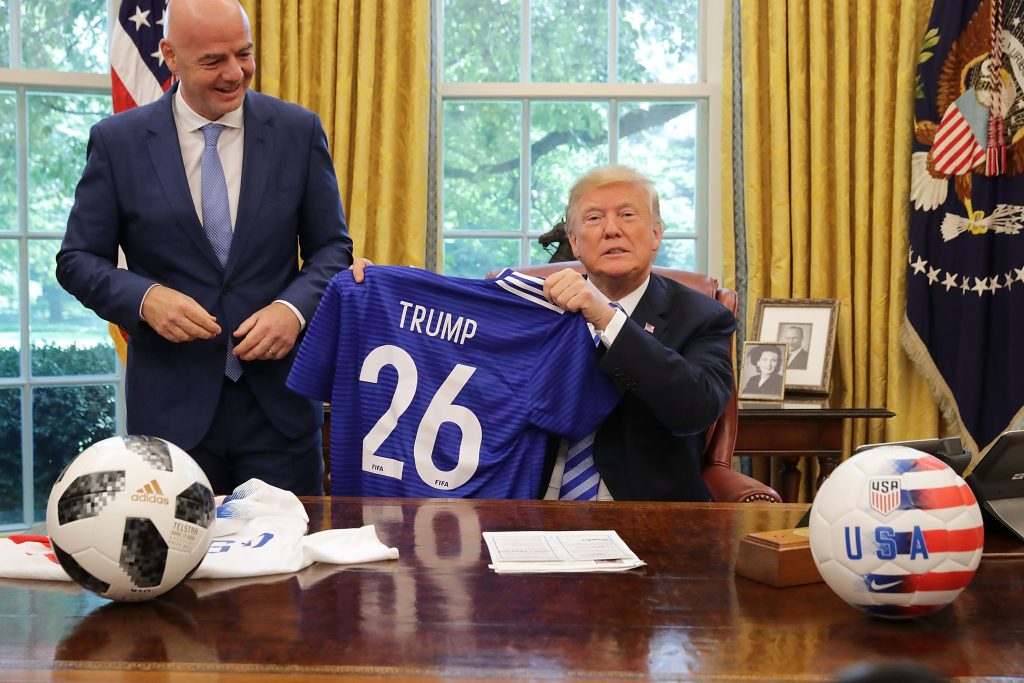 This all happened in the same day that Trump was apparently Google-ing himself, didn't like what he found, and then accused Google itself of attempting to sabotage him in a potentially illegal way.

Busy day, all in all.

popular
Bette Midler wants the US to ban Viagra because it’s ‘God’s will’ to have a ‘limp d**k’
Travis Barker’s daughter shares picture of Blink-182 star in hospital bed - tells fans to ‘send your prayers’
British teen says she was raped in Majorca hotel by 'famous actor and musician'
Police hunt for two 'laughing' men who kissed three-year-old girl in front of distressed mum
Father takes his own life after 18-month-old found dead in hot car
'You're disgusting': Prince William roars at photographer who was 'stalking' his family
Halifax has introduced staff pronoun badges and its customers are not happy
You may also like
News
Elon Musk says he would allow Donald Trump back on Twitter after 'foolish' ban
News
Deutsche Bank whistleblower found dead in LA after being reported missing
News
Trump thinks he can stop Putin from saying the word 'nuclear' ever again
News
Donald Trump channels Piers Morgan and storms out of interview after branding him a 'fool'
News
Donald Trump boasts about winning Michigan 'Man of the Year' award - but it doesn't seem to exist
Next Page