You know that other thing he said? The complete opposite thing? Yeah, he didn't actually mean that! Fake news. Sad!

During the Helsinki Summit on Monday Donald Trump said, whilst standing next to Vladimir Putin: “My people came to me and some others, they said they think it’s Russia. I have President Putin, he just said it’s not Russia. I will say this, I don’t see any reason why it would be.”

It turns out, oh boy you're not going to believe this, it turns out that was actually just a very unfortunate slip of the tongue.

Yep, that's right, instead of visibly conceding to the Russian President he actually meant to challenge him. You know, to tell him, to his face, right there on the podium in front of the television cameras, that Russia did in fact meddle in the US election in 2016 according to US intelligence.

Can you believe it? Can you? No, me neither, to be honest. But then again this is the same guy that tweeted 'covfefe'.

Trump has now said that he actually meant to say "wouldn't" instead of "would", which is, you know, a pretty crucial difference.


"In a key sentence in my in my remarks, I said the word 'would' instead of 'wouldn't," Trump admitted. 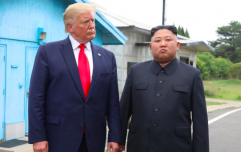 END_OF_DOCUMENT_TOKEN_TO_BE_REPLACED

In fairness, it is a very, very, very, very, very, very easy mistake to make, especially in a key sentence, and completely believable and the sort of thing that happens all the time without the person saying the word - conveying the exact opposite of the meaning they are trying to convey - actually noticing.

“I came back and I said, ‘What is going on? What’s the big deal?”’ Trump said. “So I got a transcript I reviewed. I actually went out and reviewed a clip of an answer that I gave, and I realized that there is a need for some clarification.”

Did you mate? Did you feel it needed some clarification? Funny that.

"I’ve said this many times,” Trump added. “I accept our intelligence community’s conclusion that Russia’s meddling in the 2016 election took place. Could be other people also. A lot of people out there.”

Thanks for clearing that all up for us Don. I think the blimp would have done a better job at the press conference.

You may also like
Music
50 Cent says "Vote for Trump" after seeing Joe Biden's tax plan
Politics
A mute button will be used in the next presidential debate
Music
Ice Cube under fire for working with the Trump campaign
News
Donald Trump says he'll 'kiss everyone in that audience' at campaign rally
News
WATCH: Daily Show journalist attends Trump rally and the result is pure lunacy
Next Page