With billions invested, countless lives lost, and a vacuum of power left to fill, the Taliban's campaign across Afghanistan has highlighted not only a troubling future for the Afghan people but serious questions to be asked of our 'leaders'.

END_OF_DOCUMENT_TOKEN_TO_BE_REPLACED

Dominic Raab is sunning it up in Cyprus, having posted one tweet, the usually opinionated home secretary Priti Patel has merely retweeted official statements, and even our Prime Minister has done little besides a vague and unspecific public statement.

Across the pond, things are not much better. Though numerous senators have spoken out about the Taliban taking Kabul, both President Joe Biden and Vice-President Kamala Harris have remained eerily silent on the matter. Even Press Secretary Jen Psaki, who is usually armed with a series of informative and fact-based rebukes, is nowhere to be seen.

This footage will still be played in 100 years. It now joins images of the retreat from Saigon and the naked Vietnamese girl as one of the west’s most shameful moments in modern history. pic.twitter.com/kcGLKLs5yG

END_OF_DOCUMENT_TOKEN_TO_BE_REPLACED

Though the move to leave Afghanistan was criticised originally, with numerous experts saying this eventuality would happen, people are understandably enraged at the West's lack of accountability.

"President Biden's statement on Saturday washing his hands of Afghanistan deserves to go down as one of the most shameful in history by a Commander-in-chief at such a moment of American retreat," the Wall Street Journal wrote.

"As the Taliban closed in on Kabul, Mr Biden sent a confirmation of US abandonment that absolved himself of responsibility, deflected blame to his predecessor, and more or less invited the Taliban to take over the country."

Growing momentum finally peaked on Sunday as, despite a two-decade-long campaign and billions being pumped into the countries defences, Taliban forces retook Afghanistan - not in the predicted year it would supposedly take, but in just a matter of days. President Ashraf Ghani fled, and with it, the country's political fate looks sealed.

The images of the desperate Afghans falling off the planes are horrific. The West has blood on its hands. 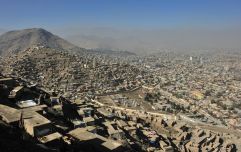 END_OF_DOCUMENT_TOKEN_TO_BE_REPLACED

"Plenty of blame to go around for the 20-year debacle in Afghanistan - enough to fill a library of books," wrote George Packer in The Atlantic. "Perhaps the effort to rebuild the country was doomed from the start. But our abandonment of the Afghans who helped us, counted on us, staked their lives on us, is a final, gratuitous shame that we could have avoided."

popular
Ricky Gervais finally says what we're all thinking about the Johnny Depp Amber Heard case
Kate Moss will testify Johnny Depp didn't push her down steps, he 'saved her', reports suggest
Elon Musk's words to first wife at their wedding reception resurfaces amid sexual misconduct allegations
Johnny Depp fans leave bad reviews for psychiatrist after he was called as witness for Amber Heard
Woman claims Johnny Depp is the father of her child in bizarre court outburst
BBC trainee accidentally posts mocking Man United message live on TV
The FootballJOE Pub Quiz: Week 38
You may also like
News
Ex-BBC journalist Andrew North 'kidnapped' by the Taliban, reports suggest
News
SAS soldier ran through gunfire to save army dog shot after it helped kill sniper
News
Boris Johnson outdoes himself with the most ridiculous denial he's ever made
News
Brit who got trapped in Kabul during Taliban takeover now wants to go to Ukraine to 'see war'
News
Taliban announces national suicide bomber battalion
Next Page