The Notre Dame beehives remain intact, the billionaires can keep their donations

The beehives and resultant 200,000 bees on the roof of Notre Dame cathedral survived a fire that gutted the rest of the building and felled its iconic spire.

On Monday evening a blaze, likely caused by an electrical fault, ripped through the Parisian landmark and came within 15 - 30 minutes of razing it to the ground.

The fire prompted a wave of donations from French elites, raising some €600 million. The Catholic Church's urgent request for renovation amounted to €6 million before the fire.

Priceless works of art and relics were recovered from Notre Dame before they were consumed by the flames, and the beehives on the roof of an adjacent sacristry miraculously survived despite remaining in situ.


This picture shows the bees were outside the burn zone at Notre Dame Cathedral -we hope they survived the heat and ashy air! #bees #beekeeping #NotreDameFire #NotreDameCathedral #NotreDame pic.twitter.com/RF3uSjQS2b 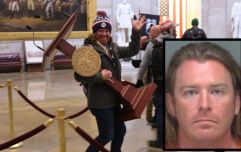 END_OF_DOCUMENT_TOKEN_TO_BE_REPLACED

Beekeeper Nicolas Geant said: "The bees are alive. Until this morning, I had had no news.

"At first I thought that the three hives had burned but I had no information.

"Then I saw from satellite images that this was not the case and then the cathedral spokesman told me that they were going in and out of the hives."

popular
Hedge fund requires bailout after Reddit users cause 800% increase in GameStop shares
A definitive ranking of every swear word from worst to best
Here's how to see who's been taking screenshots of your Instagram Stories
The definitive ranking all 151 original Pokémon from worst to best
How to make your own pizza with friends via Skype
PlayStation and Xbox users will now be able to play against each other online
Group fronted by Darron Gibson favourites to buy Wigan Athletic
You may also like
News
Three police officers shot dead in France
Entertainment
Rare Harry Potter and the Philosopher's Stone first edition book sells for £68,000
News
Mysterious illness in India has hospitalised over 500 people
Politics
Donald Trump pardons former aide Michael Flynn, who pleaded guilty to lying to the FBI
News
Joe Biden says Northern Ireland border must remain open post-Brexit
Next Page