“Yes, I was wearing pants.”

Nearly a week since the interview went viral in a big way last week, people are still talking about the interview given by Professor Robert E. Kelly on the BBC last week.

END_OF_DOCUMENT_TOKEN_TO_BE_REPLACED

We’d be amazed if you haven’t seen it by now, but on the off chance you haven’t, Kelly was being interviewed about South Korea live on the BBC when his kids came through the door behind him in hilarious fashion before his wife intervened in an effort to let Kelly focus on the job at hand.

Amazed by the scale of the reaction to the video worldwide and unsure how exactly to respond, Kelly and his family subsequently appeared in a follow-up interview with the BBC and the Wall Street Journal and held a press conference in Korea in an attempt to explain a few things. 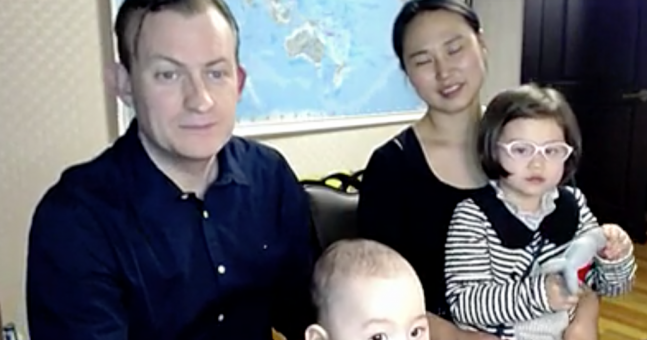 As well as that, the Kelly family issued a statement on Wednesday to clear up some of the questions raised in the aftermath of it going global, explanations for which, offered by Professor Kelly, you can see below:

Our favourite is his clarification that he was, in fact, wearing pants.

Sounds like a fairly thorough explanation to us; you can read the statement in full here.

popular
Motorcyclist dies in crash live on TV while trying to escape police
Millions could get one-off cash payment to ease cost of living crisis
What Meat Loaf actually meant when he sang 'I won't do that'
The JOE Friday Pub Quiz: Week 278
AFTV regular 'Mr DT' releases statement after being given three-year jail sentence
Son kills himself over guilt after fearing he may have given father covid, says mother
Daniil Medvedev booed mercilessly by Australian Open crowd during honest interview
You may also like
Life
Grandmother, 61, and 24-year-old husband plan to have first baby together
Life
Husband divides opinions with Christmas meal hack to save on washing up
Health
Woman horrified after warts grew on tattoo and had to be burned off
Fitness & Health
Elite runner pooed down leg 7 miles into marathon and completes run in personal best time
Social Media
Twerking bride giving groom lap dance in thong has broken the internet
Next Page