Ok, maybe not for Donald Trump, who manages to squeeze in about 10 hours of Fox News a day. 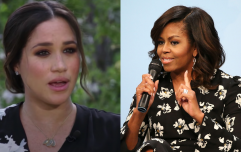 END_OF_DOCUMENT_TOKEN_TO_BE_REPLACED

But now that Barack Obama is no longer leader of the free world, he probably has a lot of time on his hands.

And it would appear that he has been putting it to good use, reading and catching a lot of movies.

In what has now become a yearly tradition, Obama has shared his favourite books, films, and songs of the year.

On the movie side of things, the highest profile entry is Black Panther, but he has also picked some other great entries including Spike Lee's BlacKkKlansman, Armando Iannucci's The Death of Stalin, and Netflix sci-fi Annihilation. 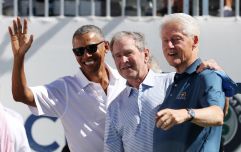 Obama, Bill Clinton and George Bush are all willing to get vaccinated on-camera

END_OF_DOCUMENT_TOKEN_TO_BE_REPLACED

His top book of 2018? Michelle Obama's Becoming, unsurprisingly ("obviously my favorite!" he adds)

Here are his picks in full:

As 2018 draws to a close, I’m continuing a favorite tradition of mine and sharing my year-end lists. It gives me a...

popular
Wagatha Christie: Wayne Rooney describes 'awkward' moment he asked Jamie Vardy to get his wife to 'calm down'
Johnny Depp's lawyers reveal poignant reason why actor refuses to look at Amber Heard in court
Julia Fox says Amber Heard was not 'powerful enough' to abuse Johnny Depp - and people are divided
Amber Heard admits she didn't honour promised $3.5m donation to civil liberties group with $7m from Depp divorce
UK’s Sam Ryder may have actually come third amid possible Eurovision voting scandal
Rochdale dog attack: Boy killed in Milnrow named as Daniel John Twigg
No, Trivago did not accidentally confirm Todd Boehly's Chelsea takeover
You may also like
Television
Barack Obama reveals he loves The Boys
Entertainment
Barack Obama is happy for Drake to play him in a movie biopic
Entertainment
The Obamas are producing a Netflix comedy about the Trump administration
News
Barack Obama tipped to become ambassador to UK under Joe Biden
News
Joe Biden breaks record for most votes in a US presidential election
Next Page