Some customers are claiming they were left "stuck upside down".

The park claims it took 19 minutes to get the 28 passengers safely off the ride after it stopped. However, several witnesses report being stuck upside down for between 30 and 40 minutes.

So being stuck mid air in the pouring rain on Galactica for 30 minutes was not pleasant..

“We were standing underneath it when the ride stopped and all the passengers were screaming and crying, they sounded terrified,” said , who was at the scene with her family. We were told the ride had flooded and I wonder if the electrics shorted in the rain.”

"This is a standard safety feature on this ride and the ride was working exactly as it is designed to do. The health and safety of our guests is our number one priority and our team followed standard procedures to get the guests off as quickly and as safely as possible. The ride has now re-opened." 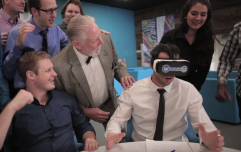 END_OF_DOCUMENT_TOKEN_TO_BE_REPLACED

It hasn't been a good year for Alton Towers – only last month the owner of the adventure theme park admitted to a "criminal breach" of health and safety laws and a count of negligence in court over an accident on June 2, 2015 which left teenage passengers Vicky Balch and Leah Washington needing leg amputations.

Got a story for JOE? Email us [email protected], or message us on Facebook.

popular
Landlord faces £40k fine after tenant puts swimming pool on roof of flats
James May 'hospitalised after crashing into wall at 75mph filming new show'
Robin Williams' wife shares reason why he killed himself
Lisa Kudrow hits back at fans complaining about lack of diversity in Friends
Furious Reading and Leeds ticketholders demand refunds as band replaces Rage Against The Machine
Ex-teacher who got pregnant by former student plans to film birth so it can be taught in schools
The JOE Friday Pub Quiz: Week 307
You may also like
Entertainment
How gambling and porn are making strides to take virtual reality into the mainstream
Life
This dad trying virtual reality for the first time is peak dad
News
Map shows UK covered in yellow as Met Office warns of 'scary' heatwave
News
Jeremy Kyle slammed for calling Nicola Sturgeon that 'horrible woman up north'
News
Fans shocked by Tommy Lee's extremely X-rated post on Instagram
Next Page