History has not been very kind to British guitar music from the mid-2000s.

NME recently published its final print issue, and wearing a trilby now singles you out as a men’s rights activist rather than an Pete Doherty acolyte. And as the skinny-jeaned teenagers of 2005 grow up, get married, and get mortgages (lol jk, we’re never going to own our own homes), the disparaging term ‘landfill indie’ more and more gets used to define the era. 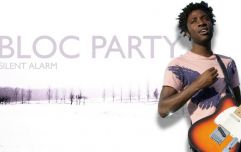 END_OF_DOCUMENT_TOKEN_TO_BE_REPLACED

But that’s a little unfair.

This week Bloc Party announced a short European tour, where they will play their superlative 2005 debut Silent Alarm in full. Which is a perfect time to give the album the respect it deserves. Indie from the last decade gets pigeon-holed as the various straw-hat-and-waistcoat-wearing sub-Libertines lads like The View, Razorlight, The Pigeon Detectives and The Fratellis. But Bloc Party were proof that that assumption is incredibly reductive.

Sure, they were still a guitar act, but instead of the jangly strumming of most Topman bands, they were much more influenced by post-punk and dance-rock. There’s a reason why today ‘Helicopter’ and ‘Banquet’ still sounds as thrilling and vital as they did a decade ago. They are songs you can dance to, as opposed to have drunken laddish singalongs to – it’s no surprise that the Silent Alarm Remixed compilation, featuring reworking by dance and electronica acts like Erol Alkan and M83, worked so well. Songs like ‘She’s Hearing Voices’ and ‘Like Eating Glass’ have a nervous, twitchy energy to them. This is perfectly exemplified by the drop two-thirds of the way through ‘Positive Tension’, when the song explodes after Kele Okereke screams “So fucking useless” – it’s a moment of raw power that genuinely gave me chills every time it burst through the headphones of my 128GB MP3 player. It is then perfectly followed by the infinitely awkward Okereke muttering “Play it cool, boy”, as the song fades out. It is early Bloc Party in a 45 second nutshell – a smart, awkward kid who wants to go crazy, but is too self-conscious to do so.

Mixed with this are Okereke’s introspective lyrics. Instead of the cheeky-chappie bravdo of The Kaiser Chiefs or The Kooks that was so prevalent at the time, Bloc Party’s are quiet, insular and paranoid. Unlike later albums, where Okereke would be more explicit about his subject matter (referencing racism and homophobia in London, and giving us the immortal line “East London is a vampire”), on Silent Alarm he’s a lot more obtuse. ‘Price of Gasoline’ is probably most explicitly referring to the then-current Gulf War, but Okereke consciously makes an effort to avoid being that on-the-nose for the large part. That means the lyrics evoke vague, yet still vivid and relatable images. The rapid fire paranoia of ‘She’s Hearing Voices’ (“Red pill, Blue Pill…”), or the snatches images of ‘Blue Light’ (“I still feel you in the taste of cigarettes”). It’s often been suggested that ‘Helicopter’ is about George W Bush – something that Okereke denies. Regardless of the truth though, the fact that it doesn’t explicitly mention Bush makes it stand up far better 13 years later. Lyrics like “As if to say, he doesn't like chocolate” and “Queuing up for some more junk food”, coupled with the military-referencing song title and machine gun-like rhythm, paint a picture of a comic book capitalist supervillain that’s still relevant in 2018.

Bloc Party would go on and evolve as a band, embracing more and more dance music influences, and Okereke would begin to state RnB as an inspiration. But all this is there, albeit in a very embryotic stage, on Silent Alarm. They were far from the only indie band from that era that still hold up – The Long Blondes, The Maccabees, The Cribs, The Thrills… (I’ll even argue Hard-Fi’s first album is a secret masterpiece, but that’s another column for another day). But Bloc Party were arguably the most complete.

In the 13 years since the album’s release, Bloc Party have had line-up changes, gone on hiatus, come back, and seen members indulge in solo projects. But it should be great to see Silent Alarm be celebrated live all these years later.