Matt Bellamy and co will take to the stage Monday December 3 for a special performance benefiting The Prince's Trust. The show will mark the band's first UK gig since they headlined the Reading and Leeds festivals last year. 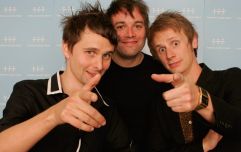 What the hell is going on with the cover for the new Muse album?

END_OF_DOCUMENT_TOKEN_TO_BE_REPLACED

“For a long time, we’ve admired the work of The Prince’s Trust,” said frontman Bellamy. “When we were starting out as a band the Trust actually gave us a small grant to buy our first PA system, which I still have to this day. It really helped set us up on the right road and we’re delighted to be able to play a show to raise funds for them.”

Tickets are limited, with early access to the show beginning Wednesday October 10 at 9am and General sale on Friday October 12 at 9am. Muse will also announce details of a full 2019 tour soon.

The band's next album, Simulation Theory, is slated for release on November 9. The latest track, Pressure, was released last week, accompanied by a video starring Terry Crews.