Dana White and Brendan Schaub don't get along.

Had it not been for that controversial Reebok deal, perhaps Brendan Schaub and Dana White would still have a cordial relationship.

END_OF_DOCUMENT_TOKEN_TO_BE_REPLACED

Schaub, who came through one of the most-watched seasons of the Ultimate Fighter ever, was one of the most vocal critics of the deal that forced UFC fighters to exclusively wear Reebok attire. The former heavyweight claimed that he made six-figures per fight from sponsorship revenue before the deal came in. If he would have competed after it was enforced rather than retiring, this would have dropped down to $10,000 a bout.

White didn't buy 'Big Brown's claim. He sarcastically told Michael Lansberg on TSN in Canada, "I'm sure this guy is making over $100,000 a fight." 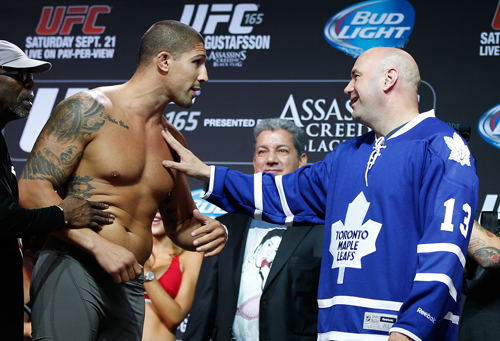 The Style Bender's not impressed

The latest clash involving Schaub and White was actually sparked by rising middleweight contender Israel Adesanya. The 79-fight pro kickboxing veteran took to Instagram to call out a point Schaub made on his Below the Belt podcast for Showtime.

"I think everyone's all high and mighty on these guys who come from kickboxing, boxing backgrounds. When they come over to the UFC, they expect them to be elite strikers. The distance, the combos, the head movement, the number of variables, it’s a completely different game, so to me that never translates. It just doesn't."

At this point in the clip, Adesanya comically closes his laptop shut. 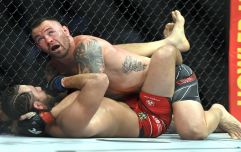 END_OF_DOCUMENT_TOKEN_TO_BE_REPLACED

The UFC president wasn't tagged in the Instagram post, but he managed to find it anyway. White tried his utmost to humiliate Schaub in the comments. He insulted his intelligence, his knowledge about fighting and even his abilities as a fighter in a remarkably harsh reply.

“Such a fuckin tool!!!! What the fuck does this idiot know about the sport or the business??? @stylebender for u to be listening to one word from this MORON is a waste of ur time. Guy went 6-5 in the UFC!!! The only thing he could teach u is how to get KO’d. Tune idiots like this OUT.”

"@danawhite whoooooooa look who got a break from folding Ronda’s laundry to jump on instagram. Bravo sir. He’s right @stylebender what do I know listen to the bald fat guy who has never been in a fight in his life. Do that. ”

No love lost between these two.