The father of a TikTok star was forced to shoot down an online stalker who visited their home and attempted to carry out an armed home invasion.

Ava Majury, 15, who has over 1.2 million followers on TikTok, was just 13 when one of her fans, @ericjustin11 - real name Eric Rohan Justin - developed an unhealthy obsession with her back in 2020.

Speaking in a New York Times interview, Majury first began interacting with Justin over messages, on Snapchat and speaking to him via online video game lobbies, where the 18-year-old would join to play with Majury and her brothers.

END_OF_DOCUMENT_TOKEN_TO_BE_REPLACED

However, things soon became deeply concerning after Justin, based in Maryland, managed to track down her home address in Naples, Florida, after friends had sold her information, including her personal phone number.

Justin began texting and calling her constantly, even doing a school kid's maths homework in exchange for more information on her. He then began asking to buy private selfies (two of which she sold for $300), photos of her body, feet and "booty pics". As she puts it, stuff that a 14-year-old shouldn't be sending" to anyone, much less an adult.

Majury then saw sense and blocked him - but Justin persisted, sending her $500 with a note that read "sorry this is all I have left I'm broke." Majury's father Rob then proceeded to text the 18-year-old, reminding him that she was a minor and that he must leave her alone. 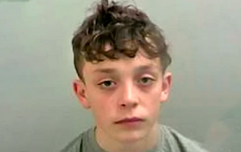 END_OF_DOCUMENT_TOKEN_TO_BE_REPLACED

Ultimately, he didn't listen and after contacting another classmate who sold him Majury's information as well as a gun, Justin arrived at their family home on July 18 and blasted a hole through her bedroom door using a shotgun.

Hearing the gunshot, her father ran into the hallway and told his wife to help the children and call 911; when he walked into his daughter's room, Justin was dressed in safety glasses, an orange Walmart worker's vest and protective earplugs.

Justin ultimately fled but Majury's father fell while pursuing him. The traumatised father then stood holding his personal firearm as he waited for police to arrive. However, Justin returned before they got there and the 51-year-old dad was forced to shoot the teenager.

When police eventually showed up and searched his body, he was carrying two mobile phones, each filled with thousands of pictures and hundreds of hours in footage of the minor.

Majury now says she's had to sever ties with dozens of friends after they sold the information which led to the terrifying ordeal and is now being homeschooled. Regardless, she still chooses to post daily videos to the platform, receiving thousands of likes and comments per post.