A snowboarder is claiming to have taken the term 'extreme sport' to a whole new level, after she was "chased by a bear" while riding in Japan.

Kelly Murphy was snowboarding in Hakuba 47 Ski Resort when an inquisitive mountain-dweller apparently started pursuing her.

The video she uploaded to YouTube starts with her singing Rihanna's "Work" in the direction of a selfie stick. So far, so your average 2016 holiday video.

But just after she starts her run, the pretty convincing-looking bear rocks up in the background and starts chasing her. We say convincing-looking, but a lot of people reckon the clip is a fake. The bear gives up before catching her, which would presumably have been the point when we got a definitive answer either way.


Kelly said she was completely oblivious of what was going on until she later reviewed the clips. She wrote on her YouTube channel: "OMG! I was going through my snowboarding videos and I found a bear chasing me!!! I nearly got eaten!!!" 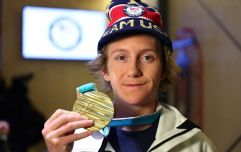 END_OF_DOCUMENT_TOKEN_TO_BE_REPLACED

The video has been viewed over 1,200 times already, though a lot of commenters have doubts about how genuine it is. Much of the cynicism seems to be about the fact that the animal in the clip looks like a brown bear, which aren't typically found in that part of Japan.

We want to believe that it is a real bear because that's way more fun. A real bear that just happens to be a big fan of Rihanna's newest material.

You may also like
Gaming
The best snowboarding game of all time might finally be getting a sequel
Life
British snowboarder gets towed by a plane at world record speed of 125 kmh (Video)
Life
Are you washing your hands correctly? This guide will let you know
Life
Spending a week as a real-life, actual pub landlord
Life
Is Bradford the new home of UK grime?
Next Page