People have been growing concerned over the colour of Queen Elizabeth II's hands seen in recent photos.

The 95-year-old monarch was pictured speaking to General Sir Nick Carter on Thursday when a number of people online noted that her hands appeared to be a rather alarming shade of purple.

END_OF_DOCUMENT_TOKEN_TO_BE_REPLACED

Given her advanced years and the passing of the Duke of Edinburgh, Prince Philip earlier this year, many were initially worried upon first glance. However, for those less clued up on common circulatory conditions, a doctor has put those fears largely aside.

Speaking to the Metro, Dr Jay Verma of the Shakespeare Medical Centre stated that this is most likely just a case of “Raynaud’s phenomenon or just really cold hands". 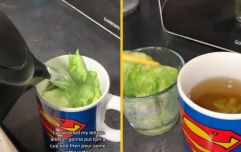 END_OF_DOCUMENT_TOKEN_TO_BE_REPLACED

Raynaud’s phenomenon/disorder is a fairly common condition that affects blood circulation in the extremities, namely the hands, which occurs when you're cold to stressed.

He went on to explain that "the purple is due to deoxygenated blood” and another medical expert added that is typically caused by a “lack of circulation, frail skin, exposed veins, bruising" or "a leakage of blood to the tissue beneath the skin" - all of which are very common, especially in older people, and it is not usually severe.

Some of the concerns among the general public came from the Queen's absence at COP26 as well as pulling out of the Remembrance Sunday service. However, it was reported that these arose through a recommendation of rest and having also sprained her back.