The Prime Minister is expecting a second baby with wife Carrie

The PM and his wife, Carrie Johnson, are expecting their second child. Posting to Instagram, the PM's wife also revealed that she had a miscarriage earlier this year. 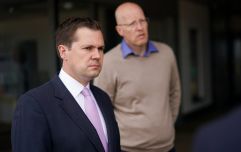 END_OF_DOCUMENT_TOKEN_TO_BE_REPLACED

Mrs Johnson previously used Instagram to announce the name of her first son, Wilfred Lawrie Nicholas Johnson, with the name Nicholas chosen in a nod to the two doctors who saved the prime minister's life when he had COVID-19.

According to reports, she wrote:

"Hoping for our rainbow baby this Christmas.

"At the beginning of the year, I had a miscarriage which left me heartbroken.

"I feel incredibly blessed to be pregnant again but I've also felt like a bag of nerves."

"I found it a real comfort to hear from people who had also experienced loss so I hope that in some very small way sharing this might help others too."

Carrie refers to a "Rainbow baby," which is a term used to describe a child born after a miscarriage, stillborn or neonatal death.

Carrie and Boris were married on May 29. The intimate ceremony at Westminster Cathedral had been planned for six months and kept under wraps, with only a few church officials involved in the preparation. The pair exchanged vows in front of a small group of friends and family.

popular
Why Inter Milan had to remove snake from away kit for Champions League tie
The FootballJOE Pub Quiz: Week 7
Barca receive £1.2bn offer from Dubai company to write off club debt
Katie Price rushed to hospital after 'drink-drive crash'
Salt Bae customers disgusted at price of steak in his London restaurant
Police mock motorists who spent three hours queuing for petrol station that was closed
Kevin De Bruyne escapes red card for late tackle and Man Utd fans are fuming
You may also like
News
Marcus Rashford calls for government to axe universal credit cut
News
Angela Rayner labels Tories "scum" as MPs call for an apology
News
Foreign workers to be let into UK to help solve petrol crisis
News
Boris Johnson repeatedly refuses to say if he could live on Universal Credit
News
Pounds and ounces set to return in post-Brexit shift back to imperial measures
Next Page