The Triplets were born 7 years apart

Though you might usually associate triplets with being born simultaneously, Helen and Oliver from Southampton are living proof that that is not always the case. Coco and Monty were born in August 2018, but their older brother Hugo was born in 2011, and yet, they are still biological triplets.

Hugo was born seven years before his siblings/Via SWNS

END_OF_DOCUMENT_TOKEN_TO_BE_REPLACED

Parents Helen and Oliver went through ten rounds of IVF, an expensive procedure that cost them £17,500 and forced them to sell their house. 10-year old Hugo is reportedly "inseparable" from his younger siblings.

Helen says Hugo bears a striking resemblance to his younger brother Monty. She says watching her newest additions grow with identical dark hair and eyes is like "going through a time machine".

"I would say other kids Hugo's age would find their brothers and sisters annoying.

"But the three of them are really close. Hugo will go over to the cupboard to get an apple and will always get three out."

Before starting IVF, Helen and Oliver had tried to conceive for two years. She began IVF treatment in 2008 but repeatedly found herself in hospital. Helen sadly suffered a miscarriage and ectopic pregnancy before Hugo was born.

Hugo was conceived on the couple's ninth cycle and joined the world in February 2011, weighing 7lb 1.5oz, and both parents agreed to freeze the remaining embryos for later. Despite the substantial age gap, the trio are still considered triplets due to the fact they were technically conceived at the same time.

"But the three of them are really close. Hugo will go over to the cupboard to get an apple and will always get three out. 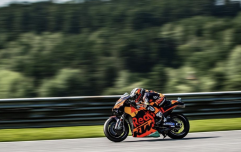 END_OF_DOCUMENT_TOKEN_TO_BE_REPLACED

"It's never a question - he always wants to help out. Monty fell over the other day and was calling out for Hugo rather than Mummy.

"Hugo really is a big help. He'll help walking them across the street and when he comes in from school they run up and each take a hand.

Helen is one happy mummy/Via SWNS

"Hugo and Monty really look alike. Of course, there are always similarities between brothers and sisters but it's freaky.

"People tell me it's like looking back in time when they see Monty. It's like having my first baby back!

"They didn't share the same first word but they make up for it now with finishing each other's sentences a lot of the time."

popular
Lionel Messi scores his first PSG goal in spectacular style
Kevin De Bruyne escapes red card for late tackle and Man Utd fans are fuming
Salt Bae customers disgusted at price of steak in his London restaurant
Netflix broadcast someone’s phone number in Squid Game and she got ‘4,000 calls a day’
Grimes says she's starting a 'lesbian space commune' after Musk split
Why Inter Milan had to remove snake from away kit for Champions League tie
Brian Laundrie's parents call 911 on Dog the Bounty Hunter as he finds fresh campsite
You may also like
News
Dad sacked his own son from family firm for refusing to get Covid jab
Entertainment
Hugh Jackman shares rare photo with mum who abandoned him as a child
News
Bride horrified as mother-in-law insists she will also wear wedding dress to ceremony
News
Man says service on flight was "abhorrent" after he refused to move for family
News
Man from Yorkshire missing for a year found in Lapland
Next Page