Only days old and already a national celeb

The world loves big babies and this baby - which also weighs the same as a bowling ball - is so big that it took two midwives to pull him out.

On Thursday October 28, 31-year-old Cherral Mitchell gave birth to her 14lb 15oz baby called Alpha. He has ranked at the third heaviest newborn in the UK, with the top spot weighing in at a staggering 15lb 8oz.

Cherral, who resides in Thame, Oxfordshire, has nicknamed her baby boy 'Butter Bean', which is perhaps a little cuter than the nickname her uncle has chosen for him - 'Baby Hippo'.

Alpha was certainly a surprise for Cherral and her 35-year-old husband Tyson, as she had the coil which should statistically prevent pregnancy.

"We didn't think he was going to be that big," said the new mother. 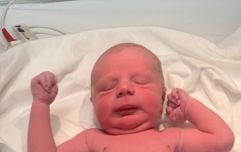 END_OF_DOCUMENT_TOKEN_TO_BE_REPLACED

"Everyone kept laughing when his head came out. My husband Tyson was like "oh my God he's chunky."

The mother of four continued: "The nurses said it had to be the biggest baby and were on their phones Googling. He's a bit of a pumpkin baby with it being so close to Halloween."

Doctors believe that Alpha's size could be because he was snacking on Cherral's sugary fluids while in the womb which - if you ask us - was just the baby getting ready for Halloween.

His mum explained: "They think that because I was diagnosed quite late with gestational diabetes, Alpha was in amniotic fluid that was sweeter.

It took two midwives to pull him out/Via SWNS

Though Alpha was estimated to weigh 11lb 1oz at his 37-week scan, the true overachiever gained three pounds the week before he was born through C-section at John Radcliffe Hospital in Oxford.

Cherral continued: "My stomach was big but not that massive so I don't know where he was hiding.

"I keep saying I gave birth to a baby butter bean. My uncle Jason calls him a baby hippo."