Millennials are offended by new Monopoly... for Millennials

The makers of Monopoly appear to have upset some of their target audience with a brand new 'Millennial' edition of the iconic board game. 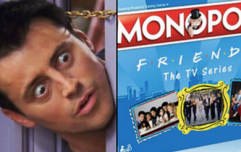 END_OF_DOCUMENT_TOKEN_TO_BE_REPLACED

Hasbro have brought out the new version of the game - Monopoly for Millennials - designed to appeal to those who reached adulthood in the early years of the 21st century.

While the key objective in the original version of the game is to accumulate as much property as possible, the new edition deliberately places emphasis on the need to enjoy experiences, instead. 'Forget real estate. You can’t afford it anyway,' the message on the box explains.

Experiences such as travel and sleeping on mate's couch are all included, the game's winner being the one who is able to collect the most.

Rich Uncle Pennybags, the game's mascot, has also received a special Millennial makeover for the game and can be seen on the box wearing sunglasses and holding a disposable coffee cup.

Exclusively sold on Walmart’s website in the United States, the game is currently out of stock. While this might suggest the new game is quite popular, it seems not everyone sees the funny side - namely, quite a few Millennials themselves.

Although obviously intended as a bit of lighthearted fun, some see it as being quite offensive. One Twitter user below describes how the game 'downgrades' a generation, whereas another points out there's nothing amusing about student debt and the the damaging effect of rising rent on the economy.

I really thought this Millennial Monopoly thing was a joke. It’s real and it’s just a fucking older generation picking on us “snowflakes”. Funny how actual adults need to grow the fuck up.

@Hasbro ain’t shit lmfao Hahahaha Millennial Monopoly making fun of the struggles of millennials. You are aware that student debt and the rising cost of rent is crippling the economy 🤦🏾‍♂️🤦🏾‍♂️. Talking about idiotic.

Monopoly released their new boardgame for millennials. As a Millennial found this highly offensive and just plain out rude. The new board game downgrades our generation.
It is sad that not much process went towards the ethical side for creating this game! pic.twitter.com/gnwWfG6dD2

A new board game from @Hasbro -- Monopoly for Millennials. What do you think of it? #SocialSip

I think it's pretty offensive and uses stereotypes to make fun of millennials but I am a millennial so I'm probably too close to the issue. pic.twitter.com/0FIqmEEr4k

So @Hasbro is trying to get boomers back into board games with overblown millennial stereotypes? Guess I finally found a monopoly I won't buy. Besides, taking on a second job to make those student loan payments- no time or money for new games. pic.twitter.com/9Sg7sMoPGP

In response to the outcry, some have pointed out that the idea of Millennials being offended by a Millennial version of Monopoly is, in actual fact, quite a Millennial reaction.

Millenials getting offended by @Hasbro #MonopolyforMillenials is just such a Millennial reaction. #Monopoly #Winning

popular
Over 200 kilos of cocaine with Liverpool FC branding seized
The JOE Friday Pub Quiz: Week 271
Tobey Maguire Spider-Man spotted in No Way Home merchandise
Pro Volleyballer spends £590K believing he was dating supermodel Alessandra Ambrosio for 15 years
Ava White, 12, dies after Liverpool stabbing - four boys aged 13 to 15 arrested on suspicion of murder
Woman left devastated when nobody turned up to her Friendsgiving
Boyfriend who stabbed partner 30 times while high on cannabis brownie cleared of murder
You may also like
Entertainment
'Monopoly For Sore Losers' is the ultimate board game for people who hate losing
Gaming
What your go-to Monopoly piece says about you
Entertainment
An all-new Game of Thrones Monopoly is coming
News
Monopoly have launched a special edition just for cheaters
Entertainment
After 82 years, Monopoly has ditched one of its classic playing pieces
Next Page