Man wins £42,000 at poker tournament then puts it all on black

Does fortune really favour the brave?

Jake Cody is a man on the edge, ladies and gentlemen. He cannot be stopped. After walking away with the top prize at the UK Poker Championships in Nottingham yesterday he headed straight for the roulette table - to place the entirety of his £42,670 winnings on black.

It was a rogue move, and he must surely have been feeling the pressure after a large crowd amassed around the table to watch his fortune unravel. Praying won't help you now mate. 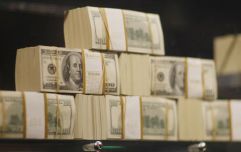 Woman loses out on £34.5m casino win due to 'malfunction'

END_OF_DOCUMENT_TOKEN_TO_BE_REPLACED

Now, if you, or I, or any other normal person had tried this, it would surely have blown up in our faces. The roulette wheel would just spontaneously combust. The ball itself would fly off and hit us in the eye in a freak accident. Best case scenario, we would land 0, lose £42k, but at least we wouldn't have to wear an eyepatch for the rest of our days. That's the sort of luck normal people have, isn't it?

Obviously he won. Of course he did. Clearly he was just feeling it - whatever "it" is - after his performance during the poker and it's really difficult to hold anything against him as Black 22 eventually lands and the crowd goes absolutely barmy.

Jake Cody's on fire. Your casino is terrified.