A surgeon had to use their 'forearm' to 'manually extract' a 2kg dumbbell from a man's anus after he had got it stuck in his rectum.

END_OF_DOCUMENT_TOKEN_TO_BE_REPLACED

The unidentified 54-year-old Brazilian man turned up at a hospital in Manaus complaining of abdominal pain, nausea and being unable to defecate.

After an initial examination struggled to find the cause  - and the man being reluctant to reveal what he surely knew was causing his suffering - doctors ordered an X-ray of his abdomen, noting that the man had been 'uncooperative' during the physical examination.

All was then revealed,

The X-rays revealed a 2kg dumbbell, about 20cm long, which was lodged where the colon meets the rectum.

END_OF_DOCUMENT_TOKEN_TO_BE_REPLACED

Doctors sedated the man and tried to remove the weight using surgical tweezers, but were unsuccessful.

With no other option, the team decided to perform a 'manual extraction', which involved one unfortunate surgeon using his 'forearm' to remove the dumbbell.

Doctors were unsuccessful in their attempts to remove the dumbbell, which is pictured here next to some 24cm long forceps for comparison (International Journal of Surgery Case Reports) 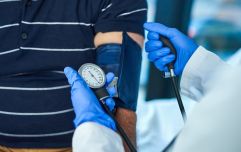 END_OF_DOCUMENT_TOKEN_TO_BE_REPLACED

The case appeared in the International Journal of Surgery Case Reports, and was described as being fraught with 'difficulties.'

But it was a success in the end, with the man being discharged from hospital three days later.

Doctors noted that the majority of patients reporting items stuck up their bottom were men, by a ratio of 28:1 to females.

They said that 'sexual gratification' was usually the 'greatest motivation.'

Whilst on this occasion the man is not expected to suffer any long-term complications, the authors of the report pointed out that other cases have resulted in internal injuries and faecal incontinence.

Although this is undoubtedly a pretty unique case, there are weirder things that have been found up people's bottoms by doctors - such as a World War Two artillery shell for example...

popular
Jordan Peterson suspended from Twitter over Elliot Page comment - says he won't apologise
DJ slammed for playing cruel song for prom queen in wheelchair that he claimed was 'perfect'
George Russell abandons car to check on Zhou Guanyu after horror crash
Groom shoots friend dead by mistake after firing shot in celebration at his wedding
Dramatic video shows the moment dad attacks 3-year-old son's suspected murderer in court
Tourist dies after losing arm and leg in shark attack at popular resort
Woman praised for 'mind-blowing' response after stranger body shames her at cake shop
You may also like
News
Demand for vasectomies triples since Supreme Court abortion decision
News
Man left with whistling scrotum after surgery goes wrong
Science
Drugs 'that could let humans live to 200' are being developed, scientist says
News
Vladimir Putin is gravely ill and will be 'dead within two years', spy chief claims
News
Polio: Source of virus could be traced to single household or street
Next Page