How 2020 became the worst year of our lives

And what a fucking year it has been. This is what we've been through together. From the fires in Australia which killed a billion animals and left thousands without homes, to America's assassination of an Iranian general, the start of the year sure was quite a ride.

We thought World War III was coming, but it didn't. What a relief. Instead we got a deadly pandemic which has led to hundreds of thousands of people dying and most of us being confined to our homes for the past three months.

It has not been an easy year. Hang in there. pic.twitter.com/uqTMbqN63W 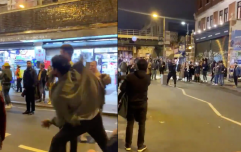 END_OF_DOCUMENT_TOKEN_TO_BE_REPLACED

Dominic Cummings went to Barnard Castle to check his eyesight, and we legitimately couldn't talk about anything else for weeks.

The first six months of this year might have taken it out of you. Things might, at times, seem hopeless. But we've been through the first 183 days and we'll get through the next 183.