The clever folk at Ofcom have applied the Nandos heat scale to every single British swearword.

The UK’s communications regulator interviewed 200 people to rank a series swearword and insults.

END_OF_DOCUMENT_TOKEN_TO_BE_REPLACED

Ofcom then took their findings to give us a handy scale of mild, medium, strong or strongest with the offensive terms.

Swear words, words linked to race and ethnicity, gender and sexuality, body parts and health conditions, religious insults and sexual references and hand gestures all came under the microscope in the sweary bit of research.

END_OF_DOCUMENT_TOKEN_TO_BE_REPLACED

According to Ofcom, words ranked mild, like cow, minger and arse, are of "little concern", and (almost) ok to use around children.

Words like bollocks, feck, tits and bitch were called medium, so you have to wait until the 9pm watershed before you can let them fly.

Ofcom also was deemed that cunt, fuck and motherfucker were the strongest words around, so keep those in your armoury until you're in really dire straights. Like when you stub your toe. Or your football team loses. 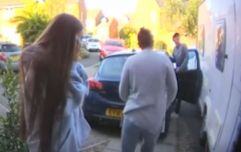 END_OF_DOCUMENT_TOKEN_TO_BE_REPLACED

Ofcom called the study the most in-depth bit of research into offensive terms yet, saying TV viewers are becoming less tolerant of racist and discriminatory language.

The full study can be found here. We recommend you take a look with Urban dictionary to hand as well. If only so you can find out what an 'Iberian Slap' is...

That horrible moment when you realise you've spent three decades on earth without knowing what an 'Iberian Slap' is. Thanks @ofcompic.twitter.com/OynxJ1nsj5