Bride dies of heart attack at her wedding, so groom marries her sister

The original bride's body was simply moved to another room.

A wedding in India took a gruesomely morbid turn when the bride died from a heart attack just before completing her wedding rituals, prompting the groom to end up marrying her younger sister. 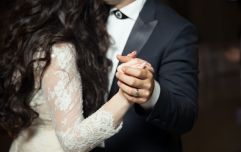 END_OF_DOCUMENT_TOKEN_TO_BE_REPLACED

The wedding took place on May 27 in the village of north Indian village of  Samaspur, according to the Times of India. It was between a woman named Surbhi and a man named Mangesh Kumaar from a nearby village.

The two were exchanging traditional flower garlands during a ceremony called the jaimala, when Surbhi collapsed. Despite a doctor trying to treat her, he later declared her dead from a heart attack.

However, the day's festivities reportedly continued, but with a new bride. After Surbhi's body was moved to another room in the house, her younger sister Nisha married the groom instead.

The bride's brother Saurabh told a local news channel: "We did not know what to do in the situation. Both the families sat together and someone suggested that my younger sister Nisha should be married to the groom."

END_OF_DOCUMENT_TOKEN_TO_BE_REPLACED

Surbhi's uncle said: "It was a tough call for our family. One daughter lay dead in one room and the wedding of another daughter was being solemnised in the other room.

"We have never witnessed such mixed emotions.

"The grief over her death and the happiness of the wedding have yet to sink in."

Just a few weeks ago, another Indian wedding made the news because of last-minute change of circumstance, as a bride in the Maharajpur town of Uttar Pradesh married a member of her groom's wedding party because her husband-to-be had ran off partway through the ceremony. The bride simply selected a new man from her ex's groomsmen and agreed on the match.