As is always the case towards the end of the Sports Personality Awards, the BBC looked back at some of those from the world of sport and sports broadcasting that have died over the last twelve months.

Always moving, this year's tribute was made all the more poignant by the rendition of David Bowie classic, Heroes, which accompanied it. 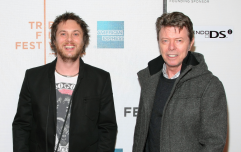 David Bowie's son says that he doesn't really like music

END_OF_DOCUMENT_TOKEN_TO_BE_REPLACED

The BBC Concert Orchestra, the Invictus Games Choir and Gareth Malone's Choir joined forces for the performance, which immediately followed a special tribute to Sports Personality of the Century winner Muhammad Ali, who also died in 2016.

popular
Pierce Brosnan has the perfect response to trolls who attack wife's weight
Chelsea forced to change Stamford Bridge changing room after Liverpool complaint
Woman stabbed to death before knifeman run over and killed as driver ‘tries to save her’
Katie Price could be jailed for five years after arrest on Friday
Hero Jordan Henderson tries to prevent Liverpool fan from taking shirt off child
TikTok star Jack Wright accuses Sienna Mae of sexual assault
Six people reported dead in a crush outside Cameroon-Comoros AFCON game
You may also like
Music
David Bowie biopic trailer branded 'cringe-inducing' and 'dreadful' by fans
Quiz
QUIZ: Name the celeb from the Great British Bake Off cake
Entertainment
Being Bowie: Living the legacy of David Bowie on stage and in song
Music
Les Misérables star cast as David Bowie in new biopic
Entertainment
A huge David Bowie celebration is coming to London
Next Page