Despite his diagnosis, Richard Fairbrass will still not have the vaccine

Richard Fairbrass, the lead vocalist of Right Said Fred and an anti-vaxxer, was rushed to hospital after contracting Covid - but he still refuses to get vaccinated.

END_OF_DOCUMENT_TOKEN_TO_BE_REPLACED

The I'm Too Sexy singer, 67, was taken by ambulance to Park Hospital in Slough, Berkshire, needing oxygen because he was struggling to breathe after falling ill on Saturday. Fairbrass spent four nights in hospital before he was sent home, where he is now recovering.

His Covid battle comes six months after he branded the vaccine a 'scam'.

"Full credit to the NHS, they were non-judgemental and very open to how you wanted to be treated - and my treatment was just keeping my oxygen levels up for a week," he said after being discharged.

END_OF_DOCUMENT_TOKEN_TO_BE_REPLACED

Regardless of the recent decline in his health, Fairbrass will still not take the vaccine.

"This vaccine is only for experimental use, it's on trial until 2023, there is no long-term data on it - anyone who takes it is foolish. Come 2023 and everything is fine, I'll do it then. I'm absolutely not going to have one now," the singer said.

Despite being approved for use, the Pfizer vaccine is still technically under clinical trial until 2023. This is however standard practice for any new drugs in order to monitor safety.

Speaking about the vaccine earlier this year, Fairbrass said: "I believe the whole thing is a scam. I really do. I've been asked to have my vaccination, but I have refused. 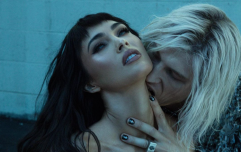 END_OF_DOCUMENT_TOKEN_TO_BE_REPLACED

"I look at it in the same way that people were advised to keep smoking because it was good for the throat. Or, 'Isn't asbestos great — it'll keep your farm clean.

"I'm not against the vaccination. If you want to do it, that's fine. I have decided to wait a year or two to make sure everything's kosher. That's all it is.

Remember back when we used to eat cake after someone blew all over it? Man, we were wild!

"But interesting enough, I'm not even allowed to say that these days. Even caution now is a sin."

Both Fairbrass and his brother Fred, with who he formed the iconic band in the late '80s, have both declined the vaccine. The duo attended an anti-lockdown protest in Trafalgar Square last September and supported anti-mask campaigners via the duo's official Twitter account.

"It saves me a great deal of time. Your mask tells me I don't need to talk to you, know you, work with you, or try to understand your mumblings.

Rachel cares about your mental health while at the same time advocates forced vaccinations. pic.twitter.com/HHrDAlZ0Kx

"You are superfluous to requirements. Many thanks."