A giant-looking open-world Harry Potter game has been announced, and it looks like a dream for fans of the books

Harry Potter Hogwarts Legacy was announced at Wednesday's PlayStation 5 Showcase, but will also be available on PlayStation 4, Windows PC, Xbox One and Xbox Series X.

The game will take place in the 1800s, in a prequel to the books and the films.

According to the game's official website, you will "experience Hogwarts in the 1800s."

"Your character is a student who holds the key to an ancient secret that threatens to tear the wizarding world apart."

"You have received a late acceptance to the Hogwarts School of Witchcraft and Wizardry and soon discover that you are no ordinary student: you possess an unusual ability to perceive and master Ancient Magic." 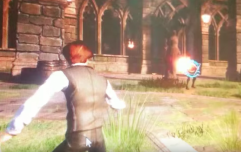 END_OF_DOCUMENT_TOKEN_TO_BE_REPLACED

"Only you can decide if you will protect this secret for the good of all, or yield to the temptation of more sinister magic."

The game promises to let you "discover the feeling of living at Hogwarts as you make allies, battle Dark wizards, and ultimately decide the fate of the wizarding world. Your legacy is what you make of it."

popular
Fernando Torres has got absolutely jacked since retiring from football
A definitive ranking of every swear word from worst to best
BrewDog launches petition to rename airport 'Joe Biden International'
Bots buy thousands of PS5s on day of GAME restock
adidas launch new Predator Freak with even more 'Demonskin'
Pardonpalooza: Donald Trump planning 100 pardons on last day of presidency
Here's how to see who's been taking screenshots of your Instagram Stories
You may also like
Entertainment
Rare Harry Potter and the Philosopher's Stone first edition book sells for £68,000
Film
Mads Mikkelsen confirmed to replace Johnny Depp in Fantastic Beasts 3
Film
Mads Mikkelsen in talks to replace Johnny Depp in Fantastic Beasts 3
Entertainment
QUIZ: How well do you remember what these Harry Potter spells do?
Fashion
An in-depth review of Poundland's invisibility cloak
Next Page