The 19-year-old responded in the best way possible, by scoring his team's second goal of the game and securing the three points for his team.

The best way to respond to racism ? #notoracism ?

After scoring, he celebrated defiantly in front of the home fans standing still with his arms outstretched.

After the game however, his teammate and Italian international Leonardo Bonucci criticised Kean for his celebration, saying he should have stayed with his teammates and that he was the blame for the abuse was "50-50" between him and the Cagliari fans. 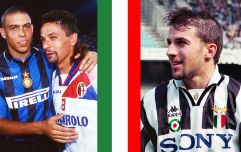 END_OF_DOCUMENT_TOKEN_TO_BE_REPLACED

"He shouldn't have celebrated in that manner," said Allegri. "He is a young man and he has to learn, but certain things from the crowd also shouldn't be heard."

Allegri did however call the abusive fans "idiots" and called for them to be given lifetime bans.

"You need great intelligence to deal with these situations and should not go to provoke people. That, of course, does not mean the idiots in the crowd and the way they reacted should be justified," he continued.

"We need to use the cameras, find those who are doing it and punish them. It's very simple, identify them and not one-year ban or two, just give them a lifetime ban.

Bonucci subsequently received many messages from Juventus fans on social media urging him to stand by his teammate.

Say no to racism

Its 50-50 to blame?? Not right Leo. pic.twitter.com/xZlrZSCOdw

There were also multiple replies with just the image of Kean's celebration.

Fair play to the Juve fans - and there's a lot of them - calling out Bonucci for his idiotic "50-50" comments about Moise Kean being racially abused last night. So many replying to his last tweet with this. pic.twitter.com/DTgIfpSC8r

popular
Furious Romelu Lukaku held back after clashing with Zlatan Ibrahimovic
A definitive ranking of every swear word from worst to best
Odion Ighalo bids emotional farewell to Manchester United
Frank Lampard 'went months' without talking to players at Chelsea
The definitive ranking all 151 original Pokémon from worst to best
QUIZ: Identify which of these 50 players played with Cristiano Ronaldo
McGregor admits shout from Dustin Poirier's corner got inside his head
You may also like
Sport
A Paul Pogba Cristiano Ronaldo swap deal might *actually* happen
Sport
South Korean fans win court case after Cristiano Ronaldo benched for Juventus friendly
Sport
Troy Deeney says Cristiano Ronaldo should join Wolves
Sport
Of course Cristiano Ronaldo is being linked with a Man Utd return
Sport
As exit rumours loom, Juventus must learn from Ronaldo failure
Next Page