Grant Holt made his pro wrestling debut, and won a Royal Rumble

She is not, however, the only person to have jumped from another sport to wrestling this year.

Holt made 154 appearances for the Canaries between 2009 and 2013. The well-travelled forward also played nearly 100 games for Nottingham Forrest, and also turned out for Sheffield Wednesday, Huddersfield and Aston Villa in his long career.

Since hanging up his boats, it had previously been announced that Holt was training to become a wrestler, with a bout scheduled for 2019.

But wrestling loves a good shock run-in, and he made his surprise debut at a WAW event in Norwich on Saturday.

Holt entered himself in a 40-man Royal Rumble – and went on to win the match by being the only man not be thrown over the top rope.

Here’s the moment @Grantholt31 won a 40 person Rumble on his wrestling debut for @WAW_UK. 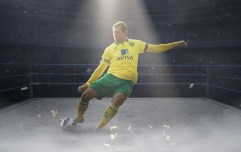 END_OF_DOCUMENT_TOKEN_TO_BE_REPLACED

It was a pretty impressive performance from Holt. Often celebrities who get involved in wrestling just stand on the apron and milk the crowd reaction, while the actual wrestlers do the actual work. Not Holt though - after almost being eliminated, he channels the spirit of WWE Hall of Famer Shawn Michaels, 'skinning the cat' and flipping himself back over the ropes and safely into the ring.

He then does a dropkick that even Daniel Bryan would be proud of, to eliminate his final opponent and win the match.

Not sure about his ring attire though - that smart-casual jumper, shirt and slack combo looks more like he should be guesting on Goals on Sunday than scrapping it out in the squared circle.

Next up, Holt has a tag team match lined up where he will be tagging with legendary UK wrestler Ricky Kinght - the father of WWE's Paige.

Grant Holt is far from the only British celebrity to step into the grappling world this year. In August, 1990s kids TV star Dave Benson Phillips made his debut for Brighton's Riptide Wrestling, and you can read our in-depth report on the action here.


popular
The JOE Friday Pub Quiz: Week 198
QUIZ: Name these 30 football badges
QUIZ: Identify the 90s film from a single image
The Evolution of the Undertaker In WWE Video Games
QUIZ: We give you two things, you have to say which is older
This is why #FreeBritney is trending worldwide right now
QUIZ: Identify the brand from just its slogan