If there are two things Antoine Griezmann loves, it is Fortnite, and releasing dramatic updates on his future

Now, however, the time that every Atletico Madrid fan knew in their hearts was coming eventually, has finally come.

The World Cup winner has announced that this Saturday's game against Levante will be his last for the club.

"It's been an incredible five years," Griezmann said in a video on Twitter. "Thank you for everything." 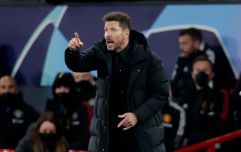 END_OF_DOCUMENT_TOKEN_TO_BE_REPLACED

"I wanted to tell the fans who have always given me a lot of love that I have taken the decision to leave, to see other things, to have other challenges."

"The truth is it has been difficult to take this route but it is what I feel I need and I would like to thank all of you for the love you have shown me during these five years."

BBC Sport have reported that Barcelona have met his €120m buyout clause.

Around this time last year, Greizmann released a similar video announcing he was staying at Atletico.