Shoppers at stores up and down the country have noticed the 'festive stock'.

Bargain hunters have spotted a deal going on Haribo at Iceland, with 1000g tubs of Haribo Goldbears and Haribo Starmix being sold for just £2. 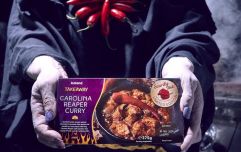 Iceland are now selling the hottest supermarket curry ever

END_OF_DOCUMENT_TOKEN_TO_BE_REPLACED

The discount is not available online as it depends on how much stock is left over from the festive season - but if you're quick you might be able to get some in-store.

The deal was first spotted by bargain hunters from Extreme Couponing and Bargains UK Facebook group and since being posted customers have been filling their boots.

To put the deal into perspective, buying a 2kg box of Starmix on Amazon will cost you over £12.

However, it's worth bearing in mind before you head out that you're not necessarily guaranteed to bag yourself the bargain at Iceland,  as stock is likely to vary between stores.

The news comes after the amazing deal on Quality Street at Tesco a week ago and also after a 525g box of Ferrero Roche was sold by Sainsbury's for just £1.30.

So how's that January diet going?