The police are now involved

A chicken shop in Milton Keynes has been bombarded with negative reviews after they refused to serve English Defence League (EDL) founder Tommy Robinson.

Robinson, real name Stephen Yaxley-Lennon, claims in a video that the restaurant named Wing Kingz refused him service because of his "politics".

A clip from the video of Tommy Ten Names having a meltdown as Wing Kingz in Milton Keynes refused to serve him. Full video in comments, will also add the links that you can support Wing Kingz. pic.twitter.com/71sFrBqyEU 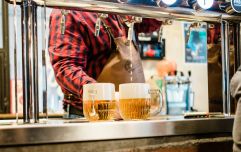 END_OF_DOCUMENT_TOKEN_TO_BE_REPLACED

"I'm pretty sure you know why," she repeats, adding that she doesn't "need to spell it out for you".

Robinson repeatedly asks for the owner but after the supervisor informs him that the owner is not on site, Robinson claims he will "bring 500 people and shut the restaurant down because you are about to discriminate against me".

Turning to the camera, Robinson says, "get on your reviews because if you have a certain political view or you think a certain way, they don't want you to eat in here".

Robinson's supporters did just that.

"As you may be aware, Wing Kingz has received many fake reviews over the past few days. This is following an incident where our customers and staff were made to feel uncomfortable by another customer," their statement read.

"Wing Kingz does not tolerate racism or discrimination in any way shape or form. We are a diverse business with customers and staff from all backgrounds and are committed to creating a safe, comfortable environment for everyone who steps through our doors.

"This matter is now with the police and anything further will be dealt with by them."

The statement concluded by thanking their customers for continued support.

Speaking to indy100, a Thames Valley Police spokesperson said: "Thames Valley Police has received a report of harassment following an incident that occurred at Wing Kingz, Milton Keynes, on Saturday (30/10). An investigation is currently ongoing. Anyone with information can contact police by calling 101 or making a report online quoting reference 43210492898."