They are typically seen as a training tool for elite-level athletes, but research shows weightlifting shoes can help anyone build bigger quads

Powerlifters and Olympic athletes are the primary purveyors of weightlifting shoes, which is at least grounded in some truth. 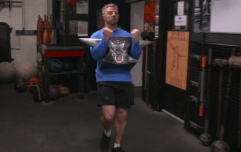 END_OF_DOCUMENT_TOKEN_TO_BE_REPLACED

For those who regularly programme the clean, jerk, snatch and squat, the shoes are essential. You can also lift more weight with weightlifting shoes - vital if you compete in powerlifting or sports where your lower body lifts are directly assessed.

Traditional running shoes are not conducive to an impressive squat. They are designed for what the name dictates - the 'does what it says on the tin' effect. The raised sole and built-in cushioning absorbs the shock of pounding away on the pavements when you head out for a run.

Heavy compound lifts require more stability, and a shoe that allows you to generate force from the ground up. Squatting shoeless - or with Converse - is a far better bet for this reason. 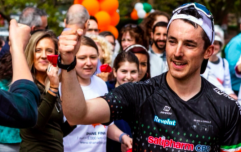 END_OF_DOCUMENT_TOKEN_TO_BE_REPLACED

The slightly-raised heel allows you to squat deeper, placing a greater stretch on the target muscle groups. The pros don't end there, though.

According to research conducted by St. Mary's University, squatting with weightlifting shoes increases the amount of knee flexion in the legs. 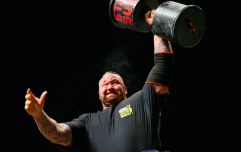 END_OF_DOCUMENT_TOKEN_TO_BE_REPLACED

The flexion of any joint will activate the muscles around it, and this is certainly the case for your legs. Increased knee flexion corresponds to greater quad muscle growth.

If you're skipping leg day or struggling to grow your pins, weightlifting shoes could prove a worthy (if slightly pricy) investment. Due to their usual cost, this is further reason to ditch expensive takeaways in the run-up to summer.

popular
Incredible case of the only known individual whose parents were two different species
Man flies 4,000 miles and spends £2,300 to track down thief who stole his AirPods
Jealous man glued wife's vagina shut as he caught her cheating with four men
TikTokers are utterly convinced there is a secret zombie apocalypse going on in China right now
Time traveller’ claims to know exact date Queen will die
Darius Danesh opened up about his health struggles before his tragic death aged 41
Praying man who said 'see you in heaven' tries to open door mid-flight
You may also like
Fitness & Health
These are the best bicep and tricep exercises, according to science
Fitness & Health
Heavy squats hugely effective for making footballers faster, study shows
Fitness & Health
Building muscle takes fewer workouts than you'd think, research shows
Fitness & Health
The five best ways to warm up before a workout
Fitness & Health
How to gain the most muscle mass during bulking season
Next Page