With Love Island back in our lives, the tabloids have got a new crop of targets to obsess over. During the next few weeks, we're going to have more stories coming to light than a library at sunrise.

END_OF_DOCUMENT_TOKEN_TO_BE_REPLACED

Personally, I can't wait to find out which contestant once forgot to scan a bag of apples at a supermarket self-service checkout, or who kissed Calum Best's dog groomer's cousin at a fancy dress party in 2008. What a thrilling time for content.

To get a head start on proceedings, I've had a creep on this year's contestants' Instagrams and come up with some very damning evidence that could see them all being locked up for a very long time. Rest assured, I will be forwarding on the following information to the relevant authorities.

Here's some pathetic stories you'll probably see being covered over the next few weeks.

A commonly incorrect assumption is that a steering wheel must be held at 10 and 2, if the wheel was a clock face. But according to the National Highway Traffic Safety Administration, 9 and 3 are now the most effective positioning areas for the driver's hands as it's proven less obtrusive to airbag deployment in vehicles with smaller steering wheels. Dani's hand is at a 5 o' clock position here, which is an ineffective placement. Regardless of the outcome of her time spent on Love Island, there is a warrant currently out for her arrest.

Just a fetching photo of Love Island's Hayley getting ready to go on a night out, nothing to see here. Except for the fact that she's using an electrical home fragrance device because, presumably, her house stinks. That's a real shame and something that could cost Hayley any potential relationships upon leaving the villa. Sure, she could be a nice girl, but if her house stinks, she'll struggle to maintain a long-lasting boyfriend. Stinky houses are said to affect 1 in 20 Brits, so it's good to have some representation on Love Island, but it would've been more honourable if Hayley was more forthcoming with the admission, rather than me having to conduct an investigation like this. Lock her up for withholding information. 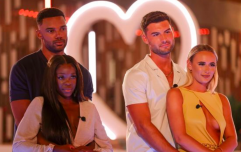 END_OF_DOCUMENT_TOKEN_TO_BE_REPLACED

I have no doubt that this is going to get picked up by The Sun. Kendall is unevenly distributing the plug sockets in her kitchen and is in very real danger of overloading the socket. If she simply plugged one of the appliances into the second socket to the left of the current socket it's using, an equilibrium of power would be established and her house would narrowly escape a power outage. Kendall's Love Island journey may spark some electricity between her and another islander, but she's going to return home to total darkness if she's not careful.

Jack the LAD - Jack Fincham puts his elbows ON THE TABLE

Lads on tour. Lads on holiday. Lads lads lads. You know what's even cooler than being a lad? Having some respect. We're all taught from a very young age that it's rude to put your elbows on the table, unless you're being operated on. Jack has proven himself to be an unruly hell raiser by proudly putting one elbow on a restaurant table in Gatwick airport. His friend has done the same, which proves the theory that disrespectful swines always travel in twos. So distracting is his blatant disregard for table etiquette, I barely even noticed his incredibly trendy handbag.

The sharing of images pertaining to any broadcaster in the UK without proper accreditation or consent is strictly prohibited. As a doctor, Alex should be aware of the severe consequences of breaking rules. Was this shoddy image of his television really worth garnering 21 likes and a lifetime behind bars? It makes perfect sense that none of the girls stepped forward for Alex. He is a dangerous man whose disregard for the law will inevitably catch up with him.

Tossing hangers, are we, Eyal? Trying to look cool for a photograph, are we? We've got no evidence of Eyal picking up that hanger after he tossed it, so it's entirely reasonable to assume that it remains on that beach in Cape Town to this very day. The cigarette would've likely emitted some ash residue also, so there'll be a heavy penalty for that as well. We're living in a crucial time where climate change is fast approaching and we need to do everything in our power to reduce its harmful effects. Litter louts like Eyal should fry for what they've done to the planet.

Truthfully, this one is a bit of a stretch. Wes' Instagram has been heavily swept by a PR person and very little remains. However, in this image it's clear as day that he's engaging in overconsumption. Two bottles of hand soap AND washing up liquid are seen resting beside the sink, which is simply far too many hygiene products. Imagine what his shower looks like. At a guess, fifteen bottles of shampoo and a bumper 5kg bottle of shower gel, no doubt. The man needs to curtail his habits for the sake of the environment. Between him and Eyal, the natural world won't make it past this summer.

Dressed as a Power Ranger for some reason, Niall is seen here flipping the double bird. He is promoting the use of profanities at a time when the world is turning to him for guidance. Young and impressionable viewers will no doubt see this expression and adopt a copycat mentality. Before we know it, every photograph in existence will feature the above pose. Family photographs, wedding photos, graduation photos, even Presidential photographs. The world will descend into profanity-ridden turmoil. Niall must be stopped. An innocent bunny ears pose is the only thing that can save us now. These islanders are scum.

popular
'My disabled client and I have great sex - he has same needs as everyone else'
Influencer criticised for photoshoot at her dad's funeral
Man knocked out in single punch by ASDA security guard and dragged across floor by his hoodie
Miralem Pjanić rubs salt in the wounds after Koeman sacking
Cristiano Ronaldo announces his girlfriend is pregnant with twins
Gordon Ramsay hits back at radio host for 'fat-shaming' daughter Tilly
Toys R Us returning to the UK four years after it went bust
You may also like
Entertainment
Liam and Millie crowned Love Island 2021 series winners
Life
OnlyFans and Love Island star Megan Barton-Hanson slams 'unfair' sexual content ban
Entertainment
Love Island star deletes social media following negativity
Entertainment
ITV responds after Love Island fans raise concerns over contestant welfare
News
You can now get paid £3,500 to watch Love Island
Next Page