We need to talk about Harry Styles' creepy body double

Your friend and mine Harry Styles is filming a video for his debut solo single at the moment. It seems to feature some sort of acrobatic aspect that requires a body double. Luckily for the internet, the body double looks really fucking creepy. 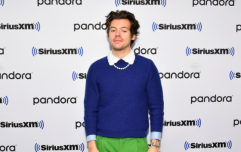 END_OF_DOCUMENT_TOKEN_TO_BE_REPLACED

Apparently, the situation we are looking at here is a body double that's wearing a Harry Styles mask and what's great about the outcome is that none of us will ever sleep soundly again.

No, that's actually quite harsh. Someone worked really hard on that mask. Maybe we're all just a bit too close to the subject, surely it's not that bad? Let's see how Barry Smiles looks with the rest of the One Direction guys, for context.

Turns out it's still incredibly creepy in the company of his band members. I have now officially upgraded this image to meme status and I won't rest until I've covered every meme imaginable. Please bear with me.

popular
Towie’s Yazmin Oukhellou and Jake McLean had ‘furious row in Turkish club’ minutes before horror crash, report claims
Conspiracy theorists believe the world will end today - here's why
Tesco will no longer stock popular pet foods including Whiskas, Pedigree and Dreamies
British schoolboy breaks internet after attending prom in sequined tuxedo ballgown
Teens are turning up to watch Minions in suits - and why cinemas have been forced to ban them
Dominic Raab may just have delivered the 'car crash interview of the year' over Chris Pincher scandal
Noel Gallagher branded 'vile' by disability charity after Glastonbury comments
You may also like
Social Media
Copenhagen: Chilling video shows shopping mall gunman who killed three in random attack
News
Harry Styles fans 'traumatised' as man plunges 'head first' from balcony during concert
Music
Louis Tomlinson shuns One Direction saying he "used to be in a band"
Music
What makes a boy band? The Vamps debate the best boy bands ever
Entertainment
All the winners from this year's BRIT Awards
Next Page