I regret to inform you that The Chase are at it again.

Everyone's favourite TV show to watch to kill the time between getting home and having dinner, The Chase, is once again embroiled in controversy as fans spot Bradley Walsh apparently whispering an answer to a struggling contestant.

END_OF_DOCUMENT_TOKEN_TO_BE_REPLACED

The shocking behaviour, and it is shocking if true, maybe the single most upsetting thing I've ever heard, happened on yesterday's show and comes only a week after the ITV staple was also accused of pausing the clock to give the Governess time to answer a decisive question and prevent a team from securing £60,000 in prize money.

The question was "Which of these compass points appears in the name of a UK national park?", and after reading out the potential answers the host could clearly be heard making a noise, a noise that sounded a lot like the letter "A", which happened to be the right answer.

Obviously, the contestant then went for "A" and Bradley Walsh pretended to be completely amazed she had managed to guess the right answer after it had previously looked as though her head might have exploded through sheer confusion. 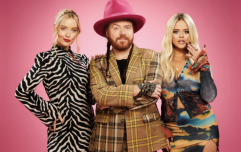 END_OF_DOCUMENT_TOKEN_TO_BE_REPLACED

The one defence Walsh has is that occasionally after reading out a particularly tough little teaser he will respond by turning to the contestant or the audience and asking "Hey?" in a confused manner, as though the question was written in Arabic or it was about quantum physics. If he was simply doing this then we all apologise Bradders. We'll send you some flowers or something.

However, loyal viewers of the show, an evening quiz format they thought they could truly believe in, remain sceptical. They've been hurt before, who can blame them for having trust issues?

Is it just me or did anyone else just hear him whisper her the answer?? (Ignore my cat in the background) @ITVChase #thechase pic.twitter.com/f8JZETrRZn

Bradley 100% just muttered ‘A’ to that lass then #TheChase

Did anyone just hear Bradley help out that girl on #TheChase ? 😁🙊