This Morning viewers angry after Holly and Phil replaced

Viewers of This Morning were not happy when they tuned into the ITV programme today to find that Holly Willoughby and Phillip Schofield had been replaced without explanation.

END_OF_DOCUMENT_TOKEN_TO_BE_REPLACED

You can imagine them all there -  the night shift workers, stay at home parents, people who've pulled a sicky - sitting down on their living room sofa with a cup of tea, expecting to find the usual duo.

The stunned silence as they realise something is very, very wrong. The blinkered realisation that it is, in fact, Eamonn Holmes and Ruth Langsford they are looking at on the screen. The change of expression, through all shades of grief: denial, anger, bargaining, depression and finally...

Well, saying that, people on Twitter never seem to quite get there, do they? Usually it's just stage two:

Putting This Morning on and seeing Eamonn and Ruth instead of Holly and Phil is like getting pizza with pineapple on, it just shouldn’t be allowed

Ugh Eamon and Ruth are hosting all week? Looks like I'll be leaving it and tuning in again next week #seeya #thismorning 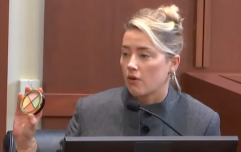 The popular duo were nowhere to be seen as fans took to Twitter to express their rage at the regular pair's absence.

Eventually it turned out that Holmes and Ruth Langsford were brought in to present the show whilst Holly and Phil took the week off for half-term.

At least Phil appears to be enjoying himself.

popular
UK drivers shocked over car park that fines people even if they don't park
Amber Heard says her sister taught Johnny Depp to snort cocaine with a tampon
Martin Skrtel retires from football due to health reasons
Wagatha Christie: Wayne Rooney describes 'awkward' moment he asked Jamie Vardy to get his wife to 'calm down'
Gary Neville reveals Man United ignored advice to sign Joao Cancelo
UK’s Sam Ryder may have actually come third amid possible Eurovision voting scandal
Megan Fox reveals she 'cut a hole in the crotch' of her jumpsuit to have sex with Machine Gun Kelly
You may also like
Entertainment
Black Mirror season six is already on its way to Netflix - and fans are losing it
Entertainment
Doctor Strange star jailed for eight years over child sex offences
Entertainment
Pirates of the Caribbean creators are not ruling out Johnny Depp's comeback despite trial
Entertainment
The JOE Friday Pub Quiz: Week 294
Entertainment
Lip readers analyse what Johnny Depp’s lawyer told him as they celebrated in court
Next Page