Fridays just weren't the same without it. We appreciate that Graham Norton deserves a break from entertaining us every so often, but it does end up leaving a hole in our weekly viewing habits. 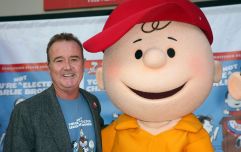 END_OF_DOCUMENT_TOKEN_TO_BE_REPLACED

When it comes to irreverent conversation and celebrity pulling power, no other chat show comes close to the Graham Norton Show, and for good reason. No one can touch Norton for generating laughs and chemistry.

Thankfully he's back and the stellar list of names on tonight's show is sure to have us tuning in.

Famous thespian couple Emily Blunt and John Krasinski will be on to promote their brand new horror flick, A Quiet Place. They will chat to Graham about a movie that has been attracting rave reviews, including this one from JOE’s own Paul Moore.

After star turns in Captain America: Civil War and Spider Man: Homecoming, Tom Holland will also be present to discuss reprising the role of Peter Parker and his famous alter ego in the new and much anticipated Marvel film Avengers: Infinity War.

And as the pop cherry on the Hollywood cake, Kylie Minogue - still going strong a month before her 50th birthday - will be performing her new single 'Stop Me from Falling', from the album Golden.