Sly accused of fooling his followers on the sly

First things first, Sylvester Stallone is 75-years-old: it's worth remembering that before you read this one any further. Regardless, people on the internet are currently scratching their heads and getting out the magnifying glasses after Rocky Balboa himself posted a workout video to his Instagram.

END_OF_DOCUMENT_TOKEN_TO_BE_REPLACED

As you can see in the video below, 'Sly' looks to be putting in an incredible amount of effort front lift two 45lb (just over 20kg) plates off the ground from a seated-knee position. This kind of lift/raises can be pretty difficult even from a standing position, let alone on your knees, which is why several are questioning if these plates are real.

Now, while we'll leave you to decide for yourself whether these lifts/plates are real or not, we would like to add that if this does happen to be an exaggerated exercise, Sly really doesn't need to be trying to prove himself at his relatively advanced age. 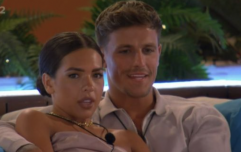 END_OF_DOCUMENT_TOKEN_TO_BE_REPLACED

We recently covered the story of how he discovered resistance bands as a totally new way of working out for him, which you would think also suggests that he is past the point of posturing with ego-lifts and all that type of stuff. However, some sections of the internet simply aren't having it.

@azrizakariyaI know he probably did it as a joke lol but too many people believed it ? ##fakeweights ##foru ##gym ##sylvester♬ 5 percent tint mix - Brad Smith

Furthermore, wrestling and all-around fitness content creator Simon Miller posted this video discussing whether or not he thought Stallone's front raises were genuine. The YouTuber also recently weighed in on Deontay Wilder's terrible form during a viral benchpress.

END_OF_DOCUMENT_TOKEN_TO_BE_REPLACED

In this instance, although he admits he "just can't figure it out", he does point towards the fact that the plates aren't behaving like weights of that size would (i.e. the physics of plate hanging from someone's grip) and nor are his muscles - there's no flexing or straining at all, really.

While we don't have any concrete proof at this point, perhaps one of the most noteworthy aspects of this entire video is the fact that the caption reads "Good “heavy” morning! Punching hard till the final bell…" - notice the air quote around 'heavy'.

Is Sly just duping everyone on purpose and waiting to or does his social admin need schooling on when and where to imply something or simply state it as fact?

popular
Bette Midler wants the US to ban Viagra because it’s ‘God’s will’ to have a ‘limp d**k’
Travis Barker’s daughter shares picture of Blink-182 star in hospital bed - tells fans to ‘send your prayers’
Police hunt for two 'laughing' men who kissed three-year-old girl in front of distressed mum
British teen says she was raped in Majorca hotel by 'famous actor and musician'
Father takes his own life after 18-month-old found dead in hot car
'You're disgusting': Prince William roars at photographer who was 'stalking' his family
Drugs 'that could let humans live to 200' are being developed, scientist says
You may also like
Life
TikTok star's son shot dead day before 19th birthday as she pleads with followers to find killer
Life
You can get paid £20k to 'work' IN a video game
Life
Groom shoots friend dead by mistake after firing shot in celebration at his wedding
Life
Model and social media star Niece Waidhofer dead by suicide at 31
Life
Couple who think they might be siblings suggest they will continue to date
Next Page