It's given us the shivers...

Steve Coogan has been pictured dressed as Jimmy Savile walking the streets of Bolton. 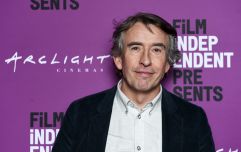 END_OF_DOCUMENT_TOKEN_TO_BE_REPLACED

The images - which hit the internet on Monday (October 11) - were taken on the Northern set of Coogan's new BBC drama The Reckoning which focuses on the disgraced TV host.

Taken through the window of a building, early images show the I'm Alan Partridge star dressed in an eccentric court jester outfit. He's standing next to a woman in an old fashioned nursing outfit, suggesting hospital scenes are currently being shot.

Jimmy Savile died in 2011 but following his death dozens of allegations of sexual abuse and rape were levelled at the former Top of The Pops presenter prompting the creation of Operation Yewtree which was set up to investigate historic sexual assault claims.

Many of Savile's victims were in hospitals across the country and regularly interacted with the now-infamous presenter because of his volunteer-status at the Leeds General Infirmary and Stoke Mandeville Hospital.

One hospital, Stoke Mandeville, conducted a report which revealed how Savile had "virtually unrestricted access" to patients throughout the 1970s and 1980s.

Savile was found to have molested at least 72 children from the age of eight and above by an inquiry following his death.

Speaking about his role in The Reckoning, Coogan said: "Neil McKay has written an intelligent script tackling sensitively an horrific story which – however harrowing – needs to be told."

popular
McDonald's launching new Big Mac with twist for first time ever in UK
Evan Rachel Wood claims Marilyn Manson ‘essentially raped her’ in music video
Everything we know about new 'stealth Omicron' strain
Premier League players hiring ex-SAS soldiers to protect their families at home
Pierce Brosnan has the perfect response to trolls who attack wife's weight
Katie Price could be jailed for five years after arrest on Friday
Hero Jordan Henderson tries to prevent Liverpool fan from taking shirt off child
You may also like
Entertainment
Steve Coogan cut off on Peston as he tears into Piers Morgan
Television
A statue of Alan Partridge has been erected in Norwich
Entertainment
The Alan Partridge Podcast is coming this week, and you can listen to a preview now
Entertainment
Steve Coogan on the future of Alan Partridge, Greed and the BBC
Entertainment
The hilarious This Time With Alan Partridge harks back to his 1990s heyday
Next Page