File under: things you love to see

New Wrexham co-owner Rob McElhenney has made a heartwarming donation to a disabled fan in need of a little help.

Alongside fellow actor Ryan Reynolds, McElhenney recently took over ownership of the Vanarama National League club. The two Hollywood stars were unanimously voted in by the club's supporters trust.

Over 90 percent of the trust voted in favour of the takeover.

A statement read: "The Wrexham Supporters Trust Board would like to thank all members who took the time to vote and take part in the process relating to the Extraordinary Ballot. There was a significant turnout for the ballot at 91.5 percent.

"Subject to final agreement, league and FA confirmation the RR McReynolds Company, LLC will take 100% control of Wrexham Football Club Limited from the WST. Both parties will now proceed with finalising the details of the takeover, and we will update Wrexham supporters as soon as we can.

"The Wrexham Supporters Trust Board would like to thank Mr Rob McElhenney and Mr Ryan Reynolds, and their advisors Inner Circle Sports and Walker Morris, for their professional and considered approach and for the time they have already put into the process. As Wrexham supporters, we would like to wish them the very best of luck in charge of our Football Club and look forward to what the future brings." 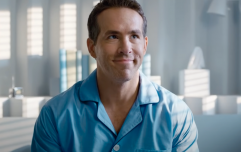 Looking back at the best Ryan Reynolds tweets for his birthday

END_OF_DOCUMENT_TOKEN_TO_BE_REPLACED

Now, it seems the pair have immediately set about thanking the local community for their support.

"I am trying to save and raise money for an adapted bath for my new flat. I have just moved to Manchester to be closer to my family because my care has been cut.

"I am a wheelchair user and currently my family struggle to bath and shower me in a 'normal' bath. I have cerebral palsy, I have no use of my left hand side and very limited use of my right hand side. There is very little I can do physically on my own but I have a voice and I am attempting to use it here appealing to the kindness of friends and strangers."

Stott added that the total cost of an adapted bath would amount to £6000.

The donation at least purports to be from the new Wrexham co-owner, and it's certainly in keeping with his actions since taking over at the North Wales outfit.

A message from our owners-elect...