Prominent right wing politicians have been met across the UK with a wave of lactose-based protest.

He can now add lactose to all his intolerances pic.twitter.com/Gd6U03aE97 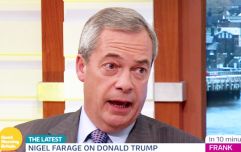 END_OF_DOCUMENT_TOKEN_TO_BE_REPLACED

Nigel Farage, Tommy Robinson (Stephen Yaxley-Lennon) and Sargon of Akkad (Carl Benjamin) have all been milkshaked in recent days.

Some have decried the form of protest as unnecessarily violent. Others, that milkshake is harmless and a demonstration of how little threat the far-right poses - rather than being met with violence, its proponents are simply doused in fast food products having become objects of ridicule. 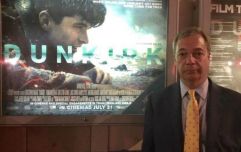 Nigel Farage stood in front of a poster for Dunkirk. Can you imagine what happened next?

END_OF_DOCUMENT_TOKEN_TO_BE_REPLACED

Ricky Gervais has escalated that though, suggesting the milkshakers "deserve a smack in the mouth."

He tweeted: "I’m not sure someone finding something entertaining always justifies it.

"What I won’t do is throw things at them. That would mean I had run out of good arguments. It would also mean I deserve a smack in the mouth."

I voted remain. I would still like to stay in Europe. I will argue with people who disagree me, always respecting their right to do so. What I won't do is throw things at them. That would mean I had run out of good arguments. It would also mean I deserve a smack in the mouth. 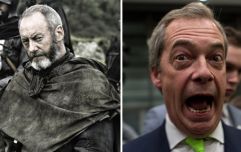 END_OF_DOCUMENT_TOKEN_TO_BE_REPLACED

One response posited: "But the habit of chucking perishables at figures in public life in order to humiliate and embarrass goes back to Roman times. Rotten fruit at bad actors, eggs at politicians etc. What’s key for me is intent. Did the bloke who lobbed a milkshake underarm mean Farage any harm?"

Ricky responded: "You’d have to ask him."

But he does love dogs, so he's alright, I guess?

No one loves dogs more than @RickyGervais 🐶 pic.twitter.com/g0Tfb44ES8

popular
Ricky Gervais finally says what we're all thinking about the Johnny Depp Amber Heard case
Binley Mega Chippy: What is it and why is it all over my timeline?
New Time Traveller's Wife series airs 'incestuous' oral sex scene that has left everyone divided
Japanese man spends £12,480 to look like a border collie - and it kind of works
Wimbledon to drop Mrs and Miss on women’s honours board to match men's titles
Gangland enforcer charged £6K to attack victims with acid and £10K to blind them
The JOE Friday Pub Quiz: Week 296
You may also like
Politics
Hugh Grant tells Nigel Farage to ‘go f*** yourself’ in response to new campaign
News
Nigel Farage has managed to blame Russia's 'invasion' of Ukraine on the EU and Nato
Sport
Andy Murray fires back at Nigel Farage over support of Novak Djokovic
News
Nigel Farage moans he's a victim of ‘toxic cancel culture’ after charity event axed
Sport
Jurgen Klopp takes aim at Nigel Farage and Boris Johnson
Next Page