Remembering the worst film of all time, Thomas and the Magic Railroad

Cast your mind back to the year 2000. We were listening to 'Oops!... I Did It Again' by Britney Spears, reading Harry Potter and the Goblet of Fire and fawning over the match made in Heaven that was Jennifer Aniston and William Bradley Pitt. 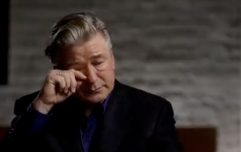 END_OF_DOCUMENT_TOKEN_TO_BE_REPLACED

Also, the Americans decided to ruin the sanctity of Thomas The Tank Engine for all of us, by trying to make their own version on it with Thomas and the Magic Railroad.

Alec Baldwin played the Fat Controller, Matilda (Mara Wilson) played an excitable young girl and Peter Fonda played her grandad. Ringo Starr was nowhere to be seen, nor was our respect for this abomination.

Let's torture ourselves by revisiting this dark stain on American/British relations history. Maybe we'll be able to pinpoint specifically why this movie has a generous score of 19% on Rotten Tomatoes.

Is that clear enough? The conductor is tiny. Sure, there were other ways to show how small he is, by placing him next to a banana for example. But this way is definitely logical and sets us up for a brilliant movie.

A woman put on her hat to answer the phone

She probably wears pants when she's doing a Skype interview as well. Moron.

The CGI was most definitely an afterthought

The entire movie appears to have been made, then they realised it looked shit and panicked.

Sorry, not sure if the flower basket enforced it enough previously, but maybe the telephone and fish bowl will help you to see that Alec Baldwin's character is small.

When Baldwin visited Thomas' world, he was regular sized because they simply couldn't be arsed using CGI any more than absolutely necessary

Now that we've clarified that he's small, let's send him into a magical land where he is regular sized. Kids love plot twists.

Matilda asked a dog which train she should get on, and then took one he barked at

She deserves a multitude of terrible things to happen to her at this point. Never trust a dog in a train station, Matilda. Even if he seems wise beyond his dog years.

The telephones were low budget and blatantly improvised on the spot

Yeah no definitely. Two flowers will act as the mouthpiece and receiver of a telephone. Alec Baldwin is an incredible actor. So convincing. Very method. Much wow.

Seriously, the budget for the movie can't have been anything more than £25

A toddler could make the above image seem more realistic, if you were to give them a jar of peanut butter and a felt tip pen for craft materials. Whomst gave this the green light?

I counted it. He mumbled his way through more than half of the film, playing some kind of tortured soul making it unclear whether he was more upset about his dead wife or a broken train.

Even Thomas wasn't thrilled about signing up for the movie...

This is speculation, but I'm pretty sure that Thomas the Tank Engine himself wouldn't have signed up for this abomination if he wasn't held to the franchise by an ironclad contract. It's sick what they've done to him.

...probably because they abandoned all logic and forgot about train tracks

A train can't run without tracks, you idiots. That's literally the only train rule you need to adhere to when you're making a movie. No conductor? Fine. No passengers or reason for travel? Fine. No tracks? BIG PROBLEMO, buddy.

This is a cartoon. Part of the movie descends into animation because they either a) gave up or b) ran over their £25 budget.

In the end, it somehow emerges that the whole thing was about gold dust all along

I'm 27 years old and I couldn't keep up with what was happening. The entire thing makes no sense. They all fanny around for an hour and fifteen minutes, then a solution to a non-existent problem emerges as being gold dust.

In the final scene, Baldwin pulls an ice cream cone out of a box of flower food, and eats it

An incredibly fitting end to an Oscar-worthy movie, the main guy, who is small by the way, eats an ice cream. So many people could've stopped this from ever getting beyond a laughable script. They should all fry for what they've done. Particularly Alec Baldwin.