Lynch is inheriting Bond's famous number in the upcoming film

Actor Lashana Lynch has opened up about playing the first female 007, and what the future holds for the famous role after Daniel Craig's departure.

END_OF_DOCUMENT_TOKEN_TO_BE_REPLACED

Lynch plays Nomi in No Time To Die, an agent who takes on Bond's famous number, in what is also Craig's final appearance as the spy.

In an interview with the Guardian, Lynch made it clear she would not be taking Craig's place in future films, saying: "No, you don't want me!"

But she did say that anyone could play the role, no matter their race or sex.

When asked who she thought should be the next Bond, Lynch said: "We are in a place in time where the industry is not just giving audiences what it thinks the audience wants. They’re actually giving the audience what they want to give the audience.

END_OF_DOCUMENT_TOKEN_TO_BE_REPLACED

Lynch said even if a toddler was playing the famous spy, "everyone would flock to the cinema to see what this two-year-old’s gonna do, no?"

Tom Hardy, Idris Elba, and Tom Hiddleston have all been linked with the role in recent years.

Speaking about her character’s role in No Time to Die, Lynch said producers wanted someone who could stand up to Bond and be "vocal and forthright and strong". 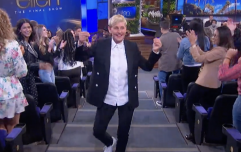 END_OF_DOCUMENT_TOKEN_TO_BE_REPLACED

And, of course, "handle a weapon, able to handle herself and not someone who takes any crap from anybody at all".

Lynch said as the plot unfolds her character becomes this "complicated, free, open-minded vocal human being who brings a really nice twist to MI6".

The film is going to be the longest in the franchise's history, and will (finally) be released in UK cinemas on 30 September.

Henry Cavill ‘pushing to be the next James Bond’